Fractal Design is doing good things in the chassis arena, and its power supplies tick a lot of the right boxes, but when it comes to liquid coolers standing out from the crowd, it's easier said than done. Just about every big-name brand has a variant of Asetek-produced all-in-ones, and though Fractal's own range of Celsius+ coolers do a fine job, they typically aim exclusively at the premium end of the market.

The Swedish firm is today shifting its attention to the mid-range with the introduction of Lumen. Sitting alongside existing Celsius models, prices start at £87 for a basic 240mm model and go up from there. 280mm and 360mm models will set you back £95 or £103, respectively, and for a further eight or nine pounds, each of the three form factors is available with Aspect RGB fans included in the box.

Our Lumen S28 RGB review unit carries a £104 MSRP, though we do wonder how that number will hold up in the weeks ahead given that the higher-end Celsius+ S28 Prisma is, at the time of writing, on offer at £110. The key difference between the two is that while the Celsius is sourced from Asetek, Lumen is manufactured by Apaltek, a lesser-known Chinese ODM, and we feel there needs to be a bigger price gap than what we're currently seeing at retail.

Patent disputes in the all-in-one market have been well-documented, and with Asetek laying claim to pumps housed within the CPU block, rivals are having to think outside the box. Apaltek's workaround, as pictured above, is to shoehorn the pump into the radiator itself. An innovative solution? Perhaps, though you do inevitably lose a bit of radiator surface area, and with the pump located nearer the outer edges of the PC, the constant hum is more noticeable to our ears.

The upside is that the CPU block can be particularly compact, and Fractal's 67mm x 43mm implementation looks rather cute both in the pictures and in person. RGB lighting is beautifully diffused across the top, the small Fractal logo is classy, and you can take your pick when it comes to orientation as the top cover is easily removed and rotated to suit your needs.

Pretty though it is, and despite the relocated pump, Lumen otherwise follows the all-in-one playbook to a tee. Maximum pump speed is listed as 4,000 RPM, a neat circle of thermal paste is pre-applied to the copper contact plate, and there's 400mm of nylon-sleeved rubber tubing leading to the aluminium radiator, which measures 312mm x 140mm x 27mm. Nothing out of the ordinary, and Fractal follows both good and bad industry trends; five-year warranty being the good, no extra thermal paste being the bad. 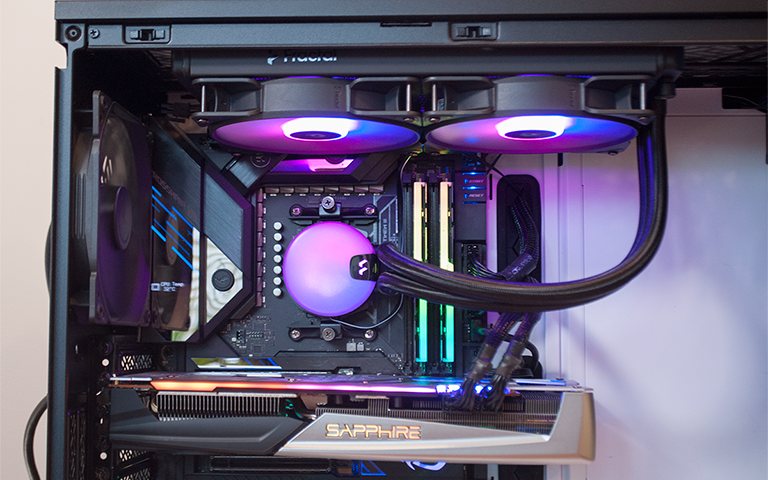 Our RGB review model includes a pair of Aspect 14 PWM fans in the bundle, each with half-a-dozen individually addressable RGB LEDs, and the two can be daisy-chained together, meaning you need use just one 5V header on your motherboard. Fractal coolers have historically fared well in terms of tidiness, and Lumen is just one step away from perfection; see that pesky cable spilling out of the CPU block? It's the aRGB connector for the lid and we wish Fractal had found a way of routing the cable through the sleeved tubing for maximum cleanliness.

Still, Lumen does look rather cute when in situ, and with the emphasis on motherboard synchronisation, there's no superfluous additional software to contend with. Articulating elbow fittings at the block end make it easy to mount the radiator, but don't read too much into the fill port sat next to the tubes. Users with ambitions of topping the cooler up from time to time will be disappointed to hear that Fractal doesn't officially support this feature, and using the refill port would in fact void the warranty. 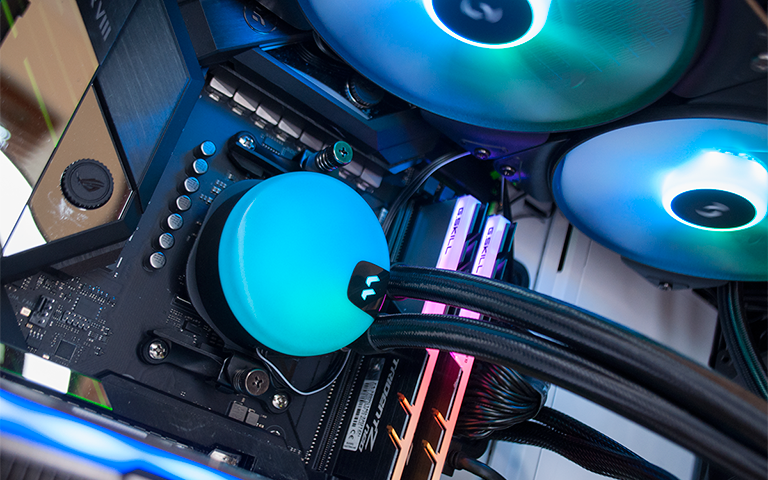 RGB lighting isn't high on our list of requirements, yet we have to admit, Lumen looks lovely inside our rig. There's a playfulness to the backlit puck, and Fractal delivers that charm with minimal fuss. The bundle includes the basic essentials to get up and running on the all latest AMD and Intel sockets bar Threadripper, and installation on our AM4 platform was complete in no time at all. Simply attach the AMD mounting ring to the block (all-in-ones still tend to be configured to Intel out the box), then secure to the motherboard's default mounting brackets using spring-loaded thumbscrews.

We're nonplussed when it comes to RGB fans - the regular £95 Lumen S28 is more in keeping with the cooler's mid-range positioning - but let's take a closer look at performance before coming to a conclusion.