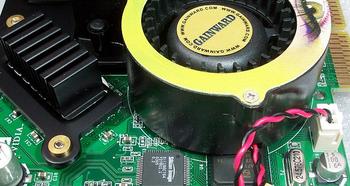 A close-up of the cooler section reveals the existence of a couple of NVIDIA's favourite transmitters and VIVO chips. On the left is the ubiquitous Silicon Image Sil164CT64 DVI transmitter, a must for all those that run TFTs. It can output to 1600x1200, thereby making it perfect for some of today's top-end panel displays. Housed next to it is Philips' SAA7108AE encoder /decoder chip. It has the ability to encode and decode streams of up to 1280x1024, making it a decent choice for both the aspiring movie-making buff and those that simply want to output to larger displays.

A word or two on the cooler. Once the power button is depressed on the PC the cooler goes into full squeal mode. O.K, so that observation is a little fair on the grounds that it is substantially quieter than the eardrum-busting FX 5800 Ultra, but the sound is still a little above what a Radeon 9800 Pro produces. Once in OS 2D mode the card pipes down to an almost inaudible whir. NVIDIA's dual-speed technology kicks in and lowers the core's speed from 450MHz to 300MHz. And when a 3D application demands some of the card's power, the fan slowly whirs its way up the RPM scale. We reckon that NVIDIA and Gainward banked on customers accepting the level of noise emitted by the card when pushed, and we'd generally be happy if the case was insulated in some way or form.

No less than 256MB of on-board memory is used on the Gainward Ultra. The rationale behind huge amounts of on-board RAM seems to lie with the increasing use of antialiasing and an anisotropic filtering at high resolutions. Add to this the increasing size of textures employed in cutting-edge games and the need for more than 128MB memory will soon be a necessity rather than the current luxury. The FX's architecture should allow for on-board memory to be used in an effective manner. 450MHz core and a possible 8 rendering pipelines is an awful lot of pixel-pushing power. The downside is that you'll end up paying for the extra 128MB. The Gainward's 850MHz DDR speed is provided by good, old DDR-I, unlike like the DDR-II-powered Radeon 9800 Pro 256MB model.

The standard DVI, S-Video and HD15 connections all fit on one PCI slot plate. The double-height of this plate is solely to protect the cooling system. It's a shame that Gainward hasn't taken the time or effort into constructing and manufacturing a one-slot affair.