AMD has made a strong case for choosing one of its many Ryzen processors for your next desktop build. Spanning from four cores to 16 on the latest Zen 2 architecture, there's something for everyone spending between £100 and £750. Those opting for performance Ryzen 7 and Ryzen 9 chips naturally gravitate towards motherboards sporting the X570 chipset. Makes sense, too, as the £300-plus chips find a suitable home on the most feature-rich mainstream platform ever.

Those with more modest build aspirations have been left in something of a quandary. The latest Ryzen 3 and Ryzen 5 chips aren't nearly as expensive yet carry the same PCIe 4.0 compatibility as their powerful siblings. For example, what do you pair the £100 Ryzen 3 3100 and £120 Ryzen 3 3300X with? X570 doesn't make a whole heap of sense as boards start at £150 and prices escalate rapidly. B450 certainly offers support at a starting price half as much as X570 but misses out on PCIe 4.0 goodness whilst offering only a couple of USB 3.2 Gen 2 ports into the bargain.

Enter B550. Widely available from today, the new chipset brings the juicy parts of X570's goodness to a fundamentally lower price point. There's PCIe 4.0 and more useful USB, amongst other benefits, so it's key to unleashing the full potential of the latest Ryzen 3000-series processors. Let's take a closer look. 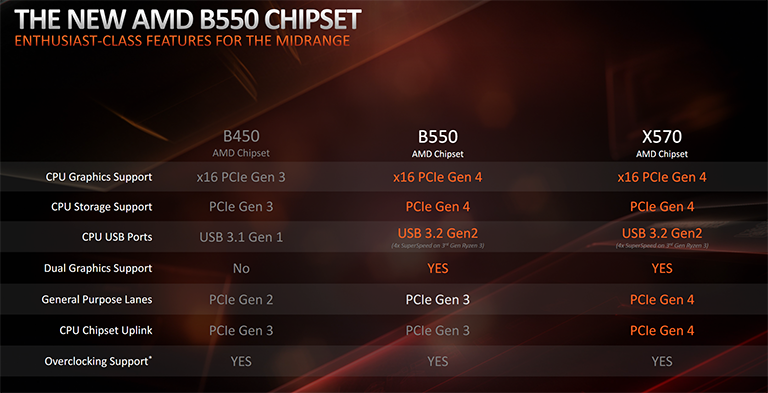 The main question for many is what does the B550 give me that the incumbent B450 doesn't? That question is brought into sharper relief with AMD's recent announcement that B450 and X470 boards will support upcoming Zen 3-based Ryzen processors, negating one obvious advantage to 500-series boards.

The answer is a few things, actually. B550 ups the features ante by supporting the high-speed connectivity emanating from Zen 2 CPUs. That means PCIe 4.0 x16 for graphics, which motherboard vendors can split into dual x8, PCIe 4.0 x4 to hang an NVMe drive off, and a total of six 10Gbps SuperSpeed USB ports - four from the CPU and two from the chipset.

Note that the link between CPU and chipset is PCIe 3.0 x4, which is the same as B450 and half that of X570. There's no technical reason why AMD could not have implemented PCIe 4.0 here, as well, but given what else hangs off the chipset, and for effective differentiation, B550 uses the older standard.

Here's a better view of what can be done with B550. Whereas premium X570 has six more USB 10Gbps ports and 16 explicit PCIe 4.0 lanes for further expansion, B550 reduces the latter to six PCIe 3.0. This is why the bi-directional conduit between chipset and CPU doesn't need the bandwidth afforded by PCIe 4.0 - there's simply not enough sustained traffic to demand it.

Apart from a greater number of higher-speed lanes, X570 boards ought to have a better overall feature-set, improved VRM technologies, more substantial heatsinks, and fancier lighting.

Even though B550 is an understandably poorer cousin to X570 from this viewpoint, it's still a solid upgrade over B450, which is the entire point, as it provides full-speed PCIe 4.0 where it matters most alongside beefing up B450's PCIe 2.0 for general lanes. As a middle ground between B450 and X570, it works just as designed. We suspect Ryzen 3/5 chips to be run on top, perhaps with a PCIe 4.0 M.2 drive in the primary slot. Such a combination is ideal for a vast majority of builders at this end of the market.

B550-based boards are therefore ideal if you want to run the latest budget Zen 2 chips and exploit PCIe 4.0 speeds for storage and the GPU. It doesn't hurt that there's more high-speed USB, too. Price is the key drive as B550 boards begin at £90.