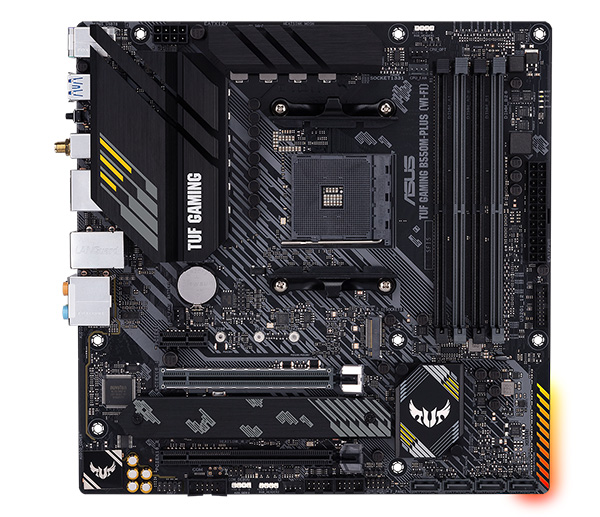 AMD's B550 chipset enables the latest Ryzen 3000-series (Matisse) processors to expose their PCIe 4.0 lanes for graphics and storage. This means users can tap into a single NVMe drive offering 5GB/s peak sequential speeds as well as any bandwidth benefits conferred to the present and upcoming PCIe 4.0 graphics cards. The downside is pricing is a lot higher than B450, so much so that many of these newer boards overlap the full-on, premium X570 in the financial stakes.

That doesn't stop industry heavyweight Asus from plying the B550 with a few offerings including an interesting micro-ATX solution in the form of the TUF Gaming B550M-Plus WiFi. Priced at £185, it is getting on towards double the cost of the B450 version, so let's see what's new and how Asus can justify the premium.

Though looking similar to its immediate predecessor, the improved 8+2-phase power stages have chunkier heatsinks on this time around, though as anyone who follows motherboards closely knows, there's really no need for elaborate cooling for anything other than seat-of-your-pants overclocking, which goes against the grain of this board in any case. This thinking also helps explain why there's no heatpipe between the two blocks. 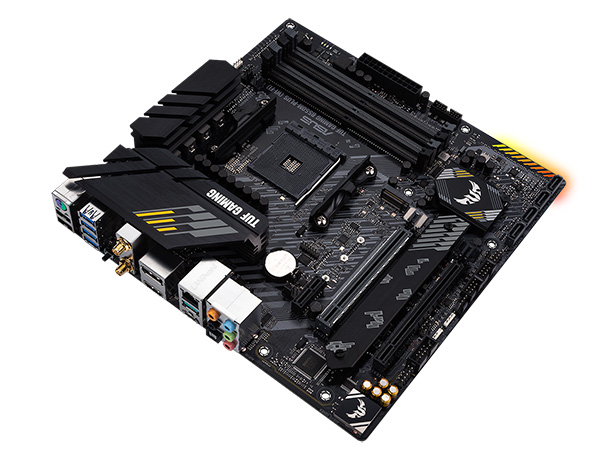 There are no onboard buttons we've become familiar with, but that's not really a problem on a micro-ATX board. Asus employs the same two NVMe slots as on the B450 but chooses the top slot for PCIe 4.0 connection, though leaves it unadorned with a heatsink. The bottom one, meanwhile, running at PCIe 3.0 from the chipset, has a non-transferrable heatsink (it's too long). One can argue that it's PCIe 4.0 drives that need heatsink help; Asus may counter with the notion that many have their own. Our take is we'd like to see explicit M.2 cooling on both slots.

RGB and fan headers are well stocked but we do feel it unduly misses out on front-panel USB Type-C support, something which the rival, cheaper MSI B550 Mortar does have. It also has two additional SATA ports over the Asus, if that matters to you.

Wanting to add value, this model features Asus' baked-in noise-cancelling technology. It purports to largely eliminate background microphone noise present in most conversations by using deep learning. Available only through the Armoury Crate software, it doesn't matter how the mic is connected - jack, USB, Bluetooth - and its usage does a solid job at preserving your voice alone. I tested it by having a conservation whilst typing on my extra-loud, clickety keyboard whose presses were muted by the software.

The I/O section shows that Asus uses the premium Intel AX200 chip for WiFi duties alongside the increasingly-common Realtek 2.5G Ethernet and reliable ALC1200 audio codec. Type-C support is here, yet there's no room for the latest USB 3.2 Gen 2x2, though we probably shouldn't expect that at this price. The board also doesn't look quite as clean as rivals due to a lack of an I/O shroud.

Overall, Asus follows the TUF recipe quite closely from one generation to the next. The main problems facing this board is, in common with rivals, the high price for the B550 chipset - it is possible to purchase an X570 micro-ATX for the same money. That and a lack of Type-C on the front panel and, subjectively, strange choice in which NVMe to cool with the heatsink.