The Intel Z590 chipset is the go-to solution for anyone looking to get the most out of the 11th Gen Core desktop processors. Enticing those with deeper pockets, contemplating mating the Core i9 models to premium motherboards, MSI puts forward the MEG Z590 Ace. 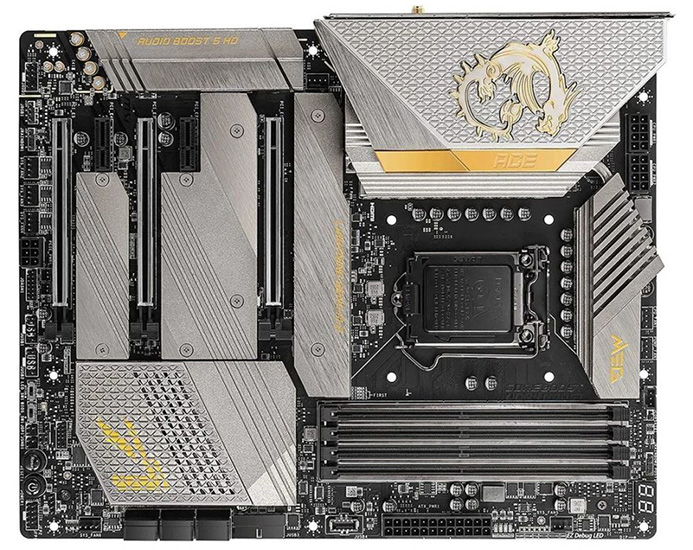 The regular Ace retails for £430 and is presented in traditional black livery. Announced earlier this week, MSI debuts a Gold Edition for those looking for more board bling. Pricing is undetermined but expect a reasonable premium over the bog-standard Ace; we reckon it'll cost closer to £500.

Other than the aesthetic colour change and use of 24-carat gold foil on the heatsinks - plus a cleaning cloth - both regular and bling editions are the same from an electrical and features point of view. Unlike the regular black version, however, there's no RGB on the dragon logo or chipset heatsink for the Gold edition, so bear that in mind if onboard lighting is important.

It's built like a tank, too, with every cover aluminium rather than plastic. Adding to the heft is an aluminium backplate which acts as a brace. Though gold is an obvious draw in the name, the board's heatsinks are mostly silver, and it's certainly an acquired visual taste.

As you'd expect, power delivery is wonderfully overkill, with 16 phases capable of 90A (1,440A) available through eight feeding into doublers. Renesas' high-end line serves the entire gamut from controller, doublers and MOSFETs. We've said it before and will say it again: having 1kW-plus available for the CPU is extreme. 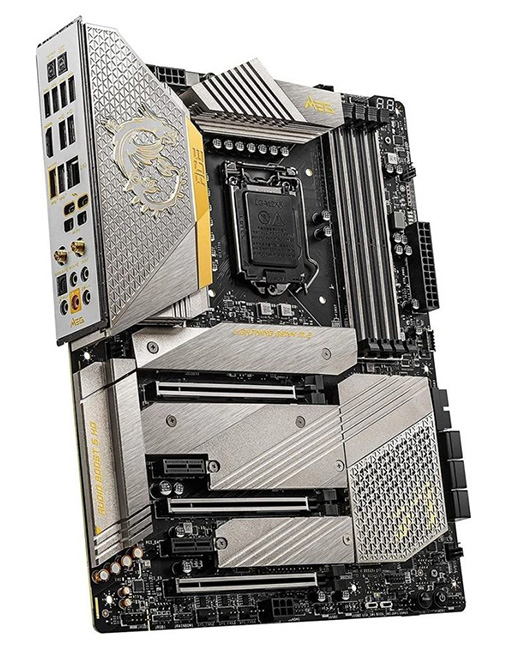 Though only a standard ATX size on an 8-layer PCB, the board feels roomier than most around the CPU socket. A couple of 8-pin CPU power plugs ensure plenty of wattage can be thrown to overclocked CPUs.

As usual for Z590, the topmost M.2 PCIe 4.0 x4 slot only works with 11th Gen CPUs. The remaining trio, all shod with heavy heatsinks, run off the Z590 chipset at a maximum PCIe 3.0 x4 speeds. As the chipset is not as lane feature-rich as AMD's X570, various sharing and limitations come into play as you populate more slots. This is not MSI's fault, though we reckon that, like Asus, the Z590 Ace should have two M.2 slots run off the CPU.

Rather, MSI wants to keep more bandwidth for the reinforced PCIe x16 slots. The top duo offers PCIe 4.0 speeds at x8 if both are populated, leaving four for the solitary CPU-attached M.2. The bottom x16 is mostly for expansion as it runs off the Z590 chipset at PCIe 3.0 x4 - you won't want to be running graphics here. Speaking of which, the board caters for two-way SLI and three-way CrossFire.

This is a creator's motherboard as much as destined for gaming. We say this because it is one of the few to feature integrated Thunderbolt 4. MSI puts Intel's JHL8540 controller to good use and offers two I/O-mounted Type-C ports offering up to 40Gbps with relevant Thunderbolt devices, 20Gbps from USB4 and 10Gbps from presently-available USB 3.2. Loaded with M.2 and Thunderbolt, MSI is pushing a lot of traffic through the chipset and its x8 DMI link. Not ideal.

You see those two Type-C ports alongside a couple of Mini DP pass-through, and we had no issues pairing the Thunderbolt up with a WD Game Dock. Audio is top-notch as MSI uses the latest Realtek ALC4082 codec with an ESS Sabre 9018Q2C DAC.

Wi-Fi 6E is accounted for by Intel's AX210 M.2 module and 2.5G Ethernet is provided by Intel's I225 controller, but does a board of this ilk deserve dual Ethernet ports, or even 5 or 10G speeds? We think so.

MSI's firmware remains the Click BIOS 5 presented at a 1024x768 resolution. There's adequate control over the fine-grained CPU voltage and frequency options. The latest BIOS adopts Adaptive Boost Technology for Core i9 chips and runs AVX workloads at full speed, at the expense of energy consumption.

We still don't like having to reboot before getting into the BIOS update section and if push comes to shove, prefer the ASUS UEFI implementation.

Prior to benchmarks, bulletproof build, clean layout, a unique look, adoption of Thunderbolt 4, and lots of reliance on the Z590 chipset to deliver adequate bandwidth to a host of high-speed devices defines the MSI MEG Z590 Ace Gold Edition.