Compact gaming keyboards keep arriving at our doorstep. Having tried a couple of options in recent weeks, we begin today's review by stating categorically that the HyperX Alloy Origins 60 is the most enjoyable candidate yet.

Priced identically to Corsair's K65 RGB Mini at £110, the HyperX sets itself apart from competitors not by going above and beyond, but rather by appreciating the fact that more is less when it comes to a 60 per cent layout. Whereas others have implemented wireless connectivity, touch-sensitive controls and insanely-fast polling rates, the Alloy Origins 60 is merely a small keyboard that's built well, satisfying to use and for the most part free of superfluous frills. 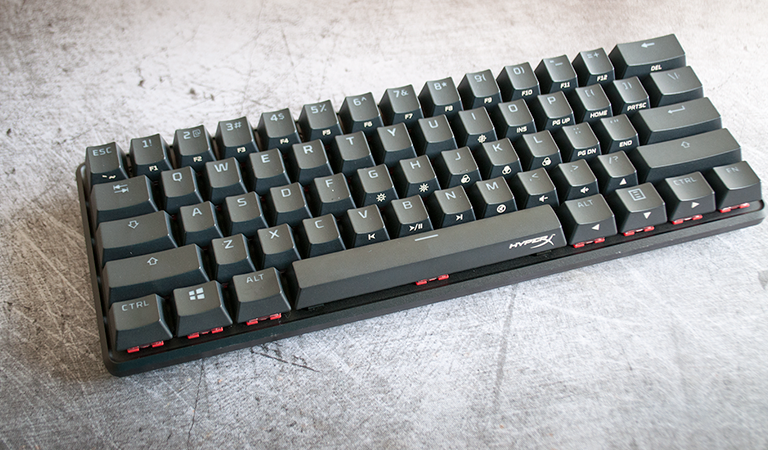 And it is the build quality that first becomes apparent. Understanding how higher-quality construction can feel so much more inviting, the HyperX tips the scales at a weighty 741g. That's 30 per cent heavier than the aforementioned Corsair, and it gives the keyboard a solid feel that's a step up from various cheaper alternatives. A good portion of that heft can be attributed to the 'aircraft-grade' aluminium body, which exhibits extreme rigidity and forms a sturdy base on which to type.

Adding to the appeal are handsome aesthetics, where HyperX once again pares things back to elevate the product as a whole. The firm's double-shot PBT keycaps aren't overly textured and have a matte-like appearance that contrasts well with the crisp legends. Secondary side-printed functions, used to compensate for some of the keys you may miss from a full-size layout, are available but aren't so many as to make the keyboard feel cluttered. Better yet, the Fn modifier has been moved to the bottom-right corner of the standard bottom row, making it instantly identifiable, and the arrow keys are sensibly assigned alongside.

Dimensions of 296mm x 106mm x 37mm are very much in line with our expectations of the form factor, and it is an attractive piece of kit. We prefer the low-profile base over a raised frame, as it helps accentuate the keys while making it easier to blow away any grime that may accumulate. The only caveat to that is that the red switch housings are visible beneath the keys when viewed from an angle; we wish they were black or transparent so as not to detract from the otherwise streamlined aesthetic. 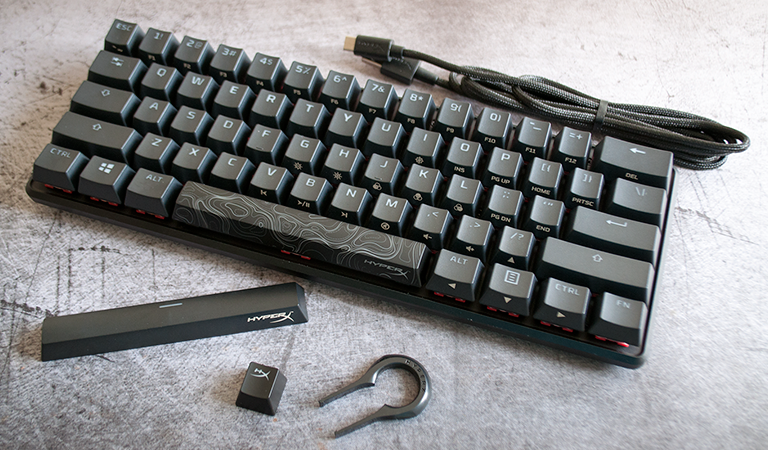 60 per cent boards benefit from a tight-knit layout, and on the Alloy Origins 60 it does feel as though there's nothing to impede user input. For gamers every key feels within easy reach, but for everyday use there are some important compromises. I can live without USB passthrough and a palm rest, yet while I enjoy typing on the HyperX (despite being sent a disagreeable US layout), I do miss my dedicated multimedia keys, arrow keys and numpad.

Still, if that's a sacrifice you're willing to make, the Alloy Origins 60 gets enough of the core essentials right to be well worthy of consideration. The braided 1.8m USB-C to USB-A cable attaches nearer the keyboard's left side, putting it well out of the way for right-handed users (sorry, lefties), and while some 60 per cent keyboards don't offer any height adjustment at all, HyperX provides two-stage rubberised feet that allow a choice of 3°, 7° or 11° angles.

Continuing the nail-the-basics approach, you get enough onboard memory for three saved profiles, N-key rollover and 100 per cent anti-ghosting, and there's not a lot to fault with the proprietary HyperX Red keyswitch. Offering 3.8mm of travel distance and actuating at 1.8mm with 45g of force, it is a consistent linear switch whose fast response and 80m-keystroke life span bodes well for high-intensity gaming. All that's missing at the time of writing is a lack of choice, and we wonder if tactile Aqua or clicky Blue switches will be made available at a later date. 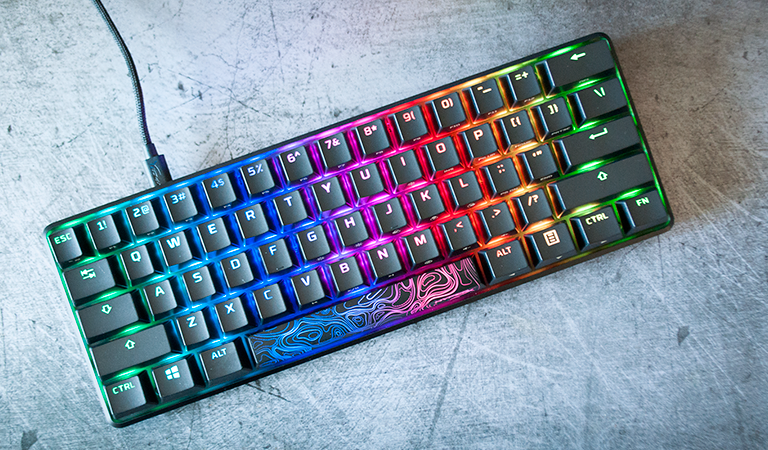 RGB lighting isn't typically high on our list of priorities, but the Alloy Origins 60 implementation is particularly swanky, and kudos to whoever designed the alternate spacebar, whose textured pattern looks and feels fabulous. That and a spare HyperX key are included in the bundle, along with a plastic puller, and though I might not be able to live with 60 per cent in the long term, I'm most definitely going to transplant that spacebar onto my regular board.

HyperX has the hardware down to a tee. Can it provide the software to match?