Anyone thinking that RGB lighting is a fad in the PC space is sorely mistaken. There's nary a component that has been left untouched in the push toward enhanced illumination. Solid-state drives (SSDs) have also been given the treatment by select manufacturers.

Team Group is such a company, and it recently launched a trio of T-Force Delta Max RGB SSDs in 250GB, 500GB, and 1,000GB capacities. 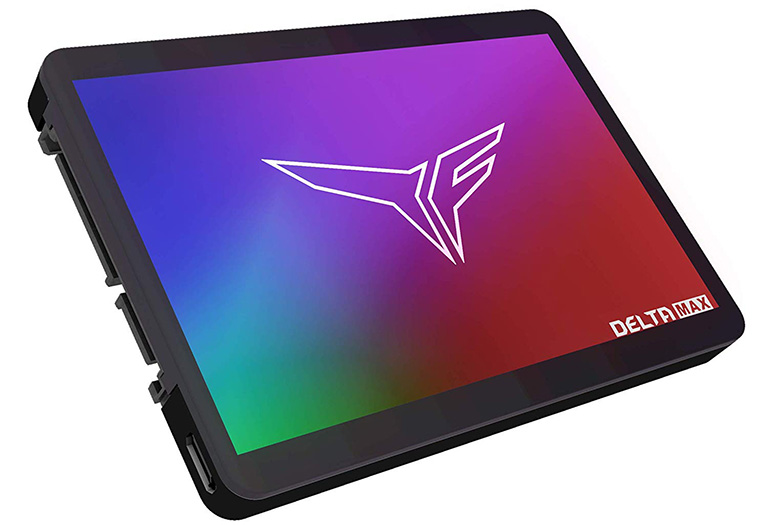 Getting the most out of RGB means using a 2.5in form factor for maximum impact. Measuring 100mm by 70mm and weighing in at 78g, it's a solid bit of kit that feels like a first-generation SSD due to its 9.5mm height. The extra 2.5mm over and above most internal SSDs is for the array of patented ARGB lighting hidden underneath the translucent plastic cover.

Being based on the SATA 6Gbps protocol, don't expect it to be scorchingly fast. For the 500GB review model, Team Group uses the Silicon Motion SM2258 controller and either Micron 64-layer or 96-layer 3D TLC NAND. Speeds of up to 560MB/s read and 510MB write, along with random read and write speeds of 90K and 80K IOPS, respectively, are the norm for this combination. Backed by a three-year warranty and offering endurance of around 110GB per day (120TBW), common on entry-level SSDs, Delta Max RGB's illumination connects to the system one of two ways. Let's explain.

On top of the standard SATA power and data ports, Delta Max RGB carries a micro-USB connector, and it must be hooked-up to the system for the RGB element of the drive to work. For those with older motherboards, the bundled micro-USB cable connects to a spare 9-pin USB header. Doing so activates a generic rainbow mixed-colour effect which is common in the industry. Those wanting to tweak the colour or synchronise with their system's lighting need to use the also-bundled micro-USB to 5V ARGB 3-pin header cable instead.

Connected this way, the lighting systems of the four major motherboard systems - Asus, ASRock, MSI and Gigabyte - are used to control the colour and effect shown on the Delta Max drive.

And here is the drive when its ARGB colour is dictated by Asus Aura Sync software from a ROG Maximus X Hero motherboard. The colour is generally even across the lighting that takes up almost all of the drive's surface area, though its brightness isn't as impressive - the bulbs on the Asus board, for example, are clearly brighter, while the RGB LEDs from a Corsair Strafe RGB MK II keyboard have more of a pop. That's the price of going for a full-coverage ARGB display, however. And it's worth noting that, using our combination of hardware, you cannot change the brightness or turn the ARGB off via software. 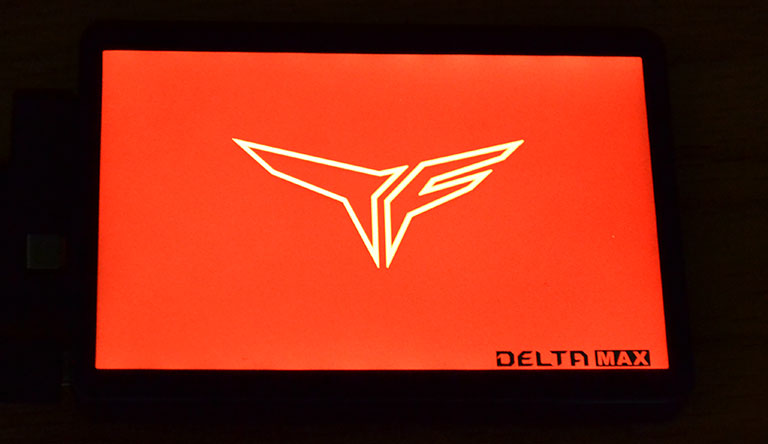 Changing colours is easy, and the Delta Max's lighting does a good-enough job of keeping up with various motherboard effects. The Team Group logo and Delta MAX model name, meanwhile, are printed on the chassis so cannot be removed; they're always in the picture, so to speak.

It's a shame that the drive's lighting isn't truly addressable, like an OLED display, where one could display a certain image or graphic - your clan's logo, for instance - for a genuine value-add.

The other cause for concern is heat, as adding lighting to a fully-enclosed SSD chassis will only serve to raise temperatures. The drive doesn't provide any metrics on internal heat, but after having it switched on for a few hours running a torture test, the sides and top become rather warm - nudging past 50°C, according to our infra-red thermometer. Such observations raise concerns regarding long-term stability of a drive that may not have any directed airflow in a chassis.

Priced at around £65, let's roll the benchmark dice and see if performance is, ahem, illuminating.