Putting together a new PC in 2021 requires a whole lot of patience. Stock shortages are such that a lot of your time would be spent scanning various websites in the hopes of landing on an available part that's typically well above RRP. No surprise that in a recent HEXUS question of the week, a fair few readers suggested that they would now consider buying a turnkey system, despite traditionally having taken the DIY route.

If you appreciate the convenience, and happen to be partial to AMD gear, PCSpecialist's Infinity LC could be right up your street. 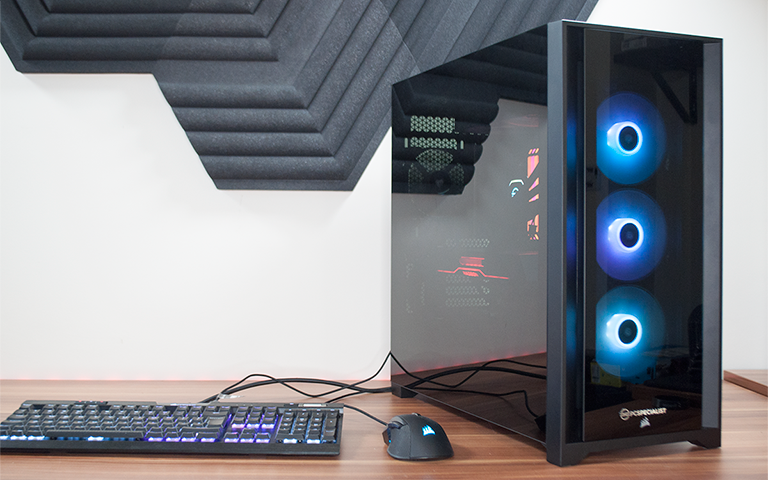 Don't expect delivery tomorrow - PCSpecialist currently quotes a build time of 'approximately 18 to 21 working days' - but for £3,299, this all-singing, all-dancing base unit champions everything that's good about AMD hardware in late 2021 and serves as a powerhouse rig that fits the bill whether you're an extreme gamer or high-end creator. Either way, the build is suitably sleek courtesy of a mid-tower Corsair iCue 5000X RGB chassis that looks the part with lots of glass, clean lines and, of course, eye-catching illumination within.

It's a chassis with plenty of kerb appeal, but while the mod-cons you'd expect are present and accounted for - including front USB-C - there is a distinct lack of sound-dampening. Our review of the 5000D earlier in the year found Corsair's supplied 120mm fans to be noisy, and PCSpecialist has added to the crescendo by incorporating seven chassis fans in total. That's three up front, three to the side, plus one at the rear, which when combined with the CPU and GPU cooling fans, make the system clearly audible at all times. 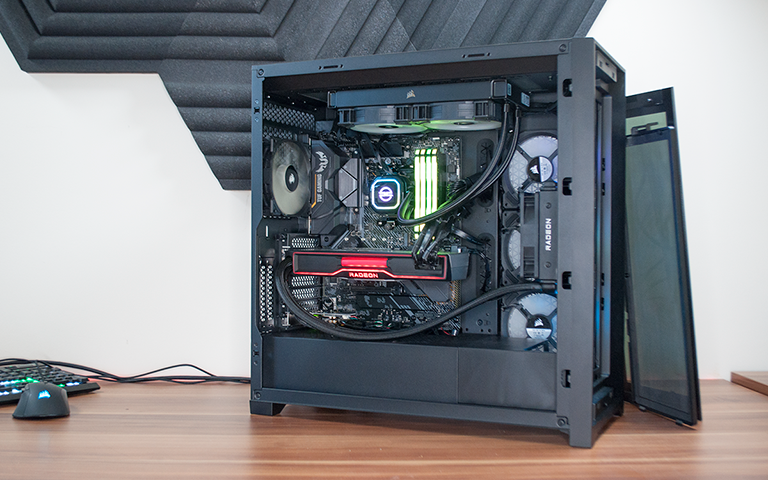 We'd want to spend some time in BIOS tuning the fan profiles, or even consider swapping out the fans for a quieter set, and in truth the overall specification deserves that extra level of refinement. At the heart of the rig is a two-pronged serving of the best consumer hardware that AMD has to offer. In the CPU department that means a 16-core Ryzen 9 5950X processor, and for the GPU, a Radeon RX 6900 XT. Not just any 6900 XT, mind you, we're talking about the overclocked, liquid-cooled MBA card that's exclusive to OEMs and system integrators.

Both parts sit atop an Asus TUF Gaming X570-Plus motherboard and are joined by a PCS-branded Corsair H100i RGB Pro XT CPU cooler, 32GB (4x8GB) of Corsair Vengeance RGB Pro DDR4-3200 memory, a super-fast 1TB Samsung 980 Pro M.2 SSD and a 4TB Seagate IronWolf Pro hard disk. The memory might have been a little faster, and it's a shame this particular motherboard is stuck with Gigabit Ethernet rather than the preferred 2.5GbE, though PCSpecialist does include a Wi-Fi 6 wireless adapter to help get connected with minimal fuss. 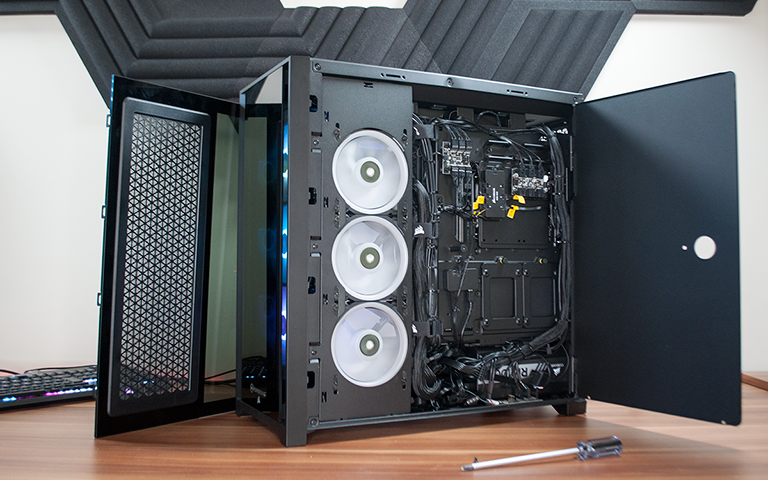 The sheer amount of RGB fans is such that cabling gets somewhat cluttered alongside the Corsair RM1000X power supply, but PCSpecialist has kept things neat enough, and the chassis' internal cover ensures none of the cables are visible through the glass side panel. Build quality on the whole is tidy, with little in the way of bloatware loaded on the 64-bit install of Windows 10 Home, though whether or not the likes of Asus Armory Suite or Corsair iCue can be classed as bloatware is a case of personal preference.

Elsewhere, our review machine isn't equipped with the latest available BIOS, and to our surprise, the Radeon graphics card wasn't screwed into the PCIe slot. No bother as the internals were well protected during shipping by Instapak expanding foam, but it goes to show; whenever you receive a pre-built machine, or any PC hardware for that matter, be sure to give everything a once over before booting up. Should you find a problem, PCSpecialist's standard three-year warranty includes collect-and-return for the first month, parts cover for the first year, and labour costs for the duration. Platinum cover, for an additional £135, extends collect-and-return and parts cover to the full three years. 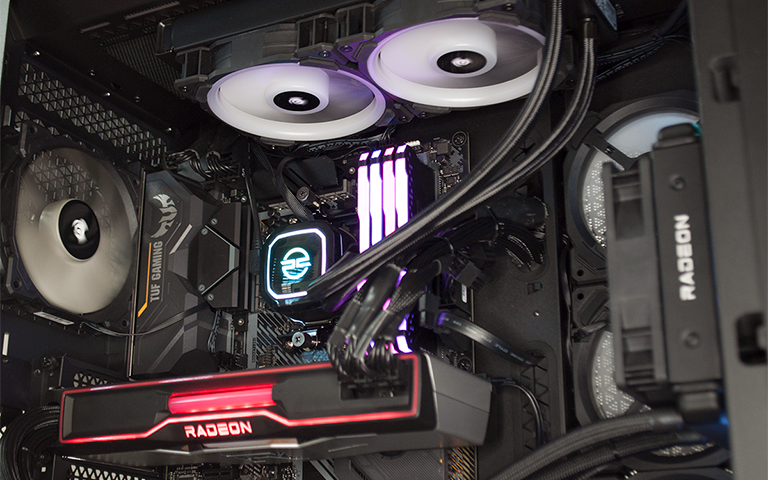 We're expecting chart-topping performance in most benchmarks - so we should given the £3,300 price point - and we're looking forward to seeing the 330W liquid-cooled Radeon, whose 2,250MHz game clock and 18.4Gbps 16GB frame buffer outpace even the liquid-cooled Sapphire Toxic.

In what seems like no time at all, we've gone from AMD rarely featuring in base units to system integrators willingly sending out PCs where Intel and Nvidia are nowhere to be seen. Quite the transformation, so lets run the benchmarks to see what AMD's best has to offer in terms of real-world performance.