When casual just doesn't get the job done

To our surprise there is apparently a subset of social gaming called hardcore. The fact that we initially assumed this implied something far racier possibly says more about our own perspectives than anything else, but there it is.

This was brought to our attention by a game developer called Kabam, which specialises in these hardcore social games. The category exists in order to differentiate games such as Kingdoms of Camelot - which Kabam makes - from more superficial, less immersive casual games such as FarmVille. These are sort of social MMOs, and Kabam aspires to be the Blizzard of social gaming.

Kabam has published a report looking at social gamers and, especially, whether they're moving some of their disposable income away from consoles and onto social games. The latter make most of their money not from the purchase of the games themselves, but from in-game purchases of assorted virtual stuff.

Imagine Kabam's surprised when the report it commissioned found people were diverting some of their console money to social games! To be fair to Kabam, it does make it clear at the start of the report, which it published in full, that one of its objectives was to "Confirm and/or enhance Kabam's internal game player profile data."

There's a bunch of data in the report and, as well as focusing on the stuff that affirms the ascendance of social gaming over consoles, and of hardcore over casual, Kabam was keen to counter the apparent perception that social gaming is mainly for middle-aged women. Who knew? Here are the two slides from the report that sum these two findings up the best. 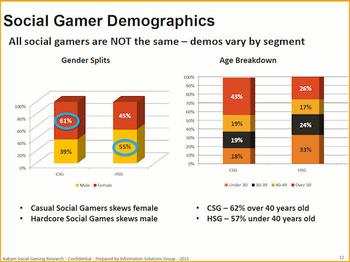 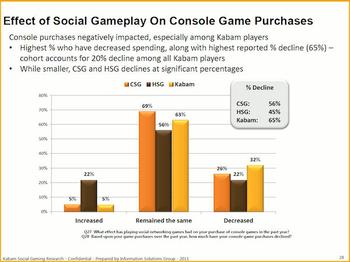 "Kabam was the first gaming company to focus on creating hardcore games on Facebook and other social platforms," said Chris Carvalho, COO of Kabam. "The research conducted by Information Solutions Group clearly demonstrates the disruptive effect hardcore social gaming is having on the gaming industry.  Gamers are migrating their playing time and the dollars they spend to social games at the expense of console and other traditional gaming platforms."

Posted by kelv_w - Thu 22 Sep 2011 20:24
I guess it is easier to get in to the game quickly on Facebook for most casual gamer. No installation, minimum system requirements to worry about and quick gameplay. Although i must say Flash is absolute crap. I hope it gets replaced soon.
Posted by aidanjt - Thu 22 Sep 2011 23:06
Hardcore ‘social’ gamer? And the oxymoron award of the year goes to…
Posted by Noxvayl - Fri 23 Sep 2011 00:41
It is interesting to see a developer interested in more than simple casual games through a medium such as Facebook. I find facebook too annoying to use because of that though.

aidanjt
Hardcore ‘social’ gamer? And the oxymoron award of the year goes to…