The Blu-Ray Disc Association (BDA) has unveiled the specs of a new Blu-Ray format with 4K and high dynamic range (HDR) imagery support at the International CES 2015. The new standard is officially named Ultra HD Blu-Ray, according to The Hollywood Reporter.

BDA's global promotions committee chair, Victor Matsuda, confirmed at the CES that the board has finally approved the draft extension of the existing Blu-Ray spec to include 4K. Whilst there are still loose ends to be worked out, the actual 4K spec extension is pretty much close to lock down. 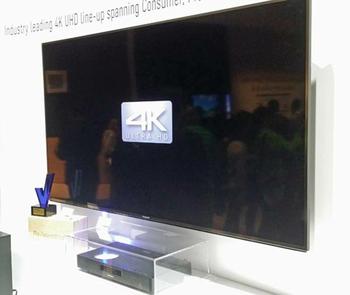 Beyond capabilities to handle higher resolution content (3849x2169) and higher frame rates (up to 60fps) than the current Blu-Ray disc format, the new format will also support a wider colour gamut (up to REC 2020 or BT2020 colour space) and 10-bit colour depth. Matsuda stresses the significance of HDR technology for the new format, one that consumers will instantly see the value of, and states that it will include a mandatory, open HDR specification. In addition, he confirmed optional technology support which currently includes the "Dolby (Dolby Vision and Philips HDR technology".

However, this does not necessarily mean that all Ultra HD Blu-Ray Discs will include HDR, since not all movies shot in 4K are mastered with HDR, though the new format does support it. Ultra HD Blu-Ray will unfortunately require new player hardware, but the members of the BDA's goal in creating the new spec extension is to future-proof the format for quite some time.

The new discs are said to hold up to 66GB in dual-layer format, and 100GB in triple-layer format. Supported players must be backward compatible with 1080p Blu-Ray discs, DVD and (V)CD. Furthermore, the players will include the HEVC (H.265) codec and support HDMI 1.2 and 2.0. Panasonic unveiled an Ultra HD Blu-Ray player during the CES that will be available this year, and whilst not specifically mentioned, 3D support and interactive features could also be on the cards.

The complete technical specification is expected to be finalised and released by mid-2015 so that format licensing can begin, and the first titles are expected to be on the market before the end of the year.

Posted by sykobee - Fri 09 Jan 2015 13:05
Finally 100GB optical discs will come out for consumer applications. I wasn't expecting it to be 33GB per layer though, I thought it would be quad-layer 25GB, like current BluRay.

HEVC makes sense to keep the bitrate lower than it would be with H.264.

I hope that 4K BluRay movies will include a standard BluRay copy as well, or come in a box that isn't blue so consumers can easily tell they're not compatible.
Posted by Defiant - Fri 09 Jan 2015 13:37
Wondering if this means we will see a bitrate drop for those films in 1080p running to near Blu-ray disc capacity just now already!
Posted by watercooled - Fri 09 Jan 2015 13:39
Funnily enough I was only wondering about this last night, wondering what would be BD's ‘successor’ so to speak. Going back a few years, some places were expecting the likes of HVD to be appearing soon, but nothing seems to have happened with that recently. Then again, we're probably still some way off realistically needing ~1TB optical media for video consumption. 100GB would seem more than enough for the next few years given HEVC.
Posted by CampGareth - Fri 09 Jan 2015 13:46

Defiant
Wondering if this means we will see a bitrate drop for those films in 1080p running to near Blu-ray disc capacity just now already!

Just remember that the existing bluray standard is ancient, so while a h.264 bluray might run up to 50GB, a h.264 copy of the film with all the bells and whistles in use on the encoding side can result in a 10-20GB copy of the same film with no appreciable loss of detail. H.265 is basically just H.264 with all those bells and whistles added, plus some extras. It is a very real possibility to get those same movies in UHD at 80GB or so.
Posted by watercooled - Fri 09 Jan 2015 14:02
I'm not sure how a new standard would imply a bitrate drop?

Anyway yeah you have to remember that to preserve compatibility, you can't really add compression features which demand more of the decoding hardware. More recent releases/levels of h264 allow greater compression than the original BD standard (1/5 the size is definitely pushing it though). More modern encoders also allow greater compression efficiency without adding a lot of demand to the decoding, e.g. psychovisual enhancements which aim to preserve perceptual quality rather than mathematical similarity, but these tend to apply more at lower bitrates. The advantage of something like BD is you can throw so much bitrate at it that you don't really need to worry about it.

There's more to HEVC than h264 with a few bits added though. Sure it borrows some techniques from h264, and some tricks learned in later implementations, but it's an entirely new codec. h264 itself similarly borrowed techniques from codecs before it like MPEG2, DivX, etc.

It's also important to remember that bitrate requirements don't necessarily scale linearly with resolution, so e.g. only in worst-case are you likely to need anything approaching 4x the bitrate of 1080p for 4k, and even then, psy enhancements mean you don't necessarily need that much to preserve perceptual quality anyway. However with HEVC and larger capacity, again that's something which probably isn't a big concern.