Google already showcased the design and some of the key features of the Pixel 6 and Pixel 6 Pro smartphones prior to the launch on Tuesday, but there are still plenty of juicy details you need to absorb to get a feel for these new flagship offerings. Key points are that the new Pixel flagship phones debut Google's octa-core Tensor processor, an attractive rear camera array claimed to be "the world’s most advanced smartphone camera," more useful smart features than ever, and Android 12.

Let's talk about the hardware first. Both of the new mobiles have quite a lot in common. As well as sharing the same new Google Tensor processor, they have the Titan M2 security chip, the same overall design, and a rear camera array featuring a 50 megapixel main sensor. 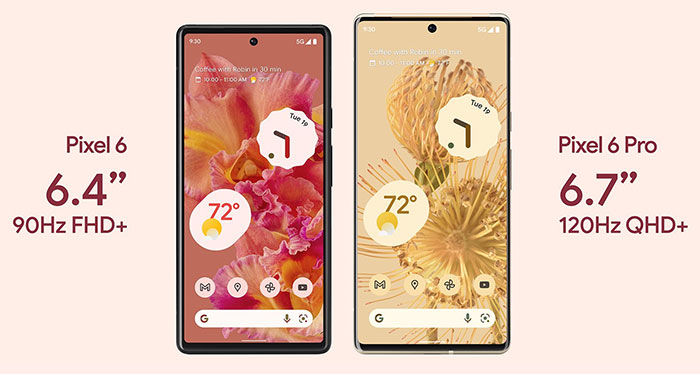 The Pixel 6 Pro rises above its sibling with a bigger 6.7-inch waterfall QHD OLED screen with 120Hz VRR. This compares to the 6.4-inch FHD+ OLED screen with up to 90Hz refresh of the smaller Pixel 6. Additionally, the Pro model comes with 12GB rather than 8GB of RAM, and a more capacious max storage configuration, but both phones use UFS 3.1. 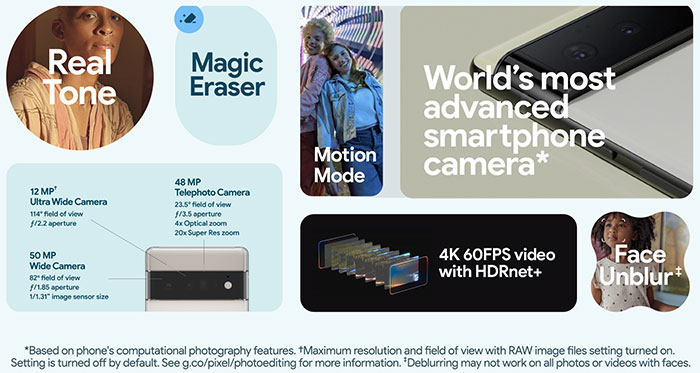 The camera array provides another step up in spec in the Pro model, with Google adding a 48MP 4x optical zoom camera to the mix, for a total of three rear cameras. Both models share the following two cameras; 50MP main camera with f/1.85 lens and OIS, 12MP ultrawide camera with f/2.2 lens. Google differentiates the regular and pro models via the selfie cam too, with the Pro model enjoying a higher MP count and expanded FoV. 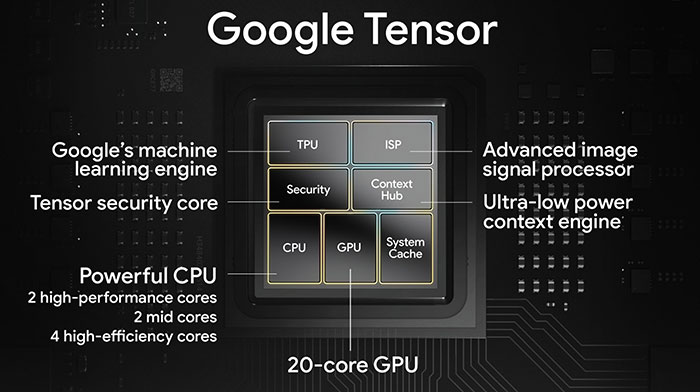 A significant introduction with these 6th gen Pixel phones is of Google's own Tensor processor. Very likely based around a Samsung design (and made by Samsung at 5nm) the processor. It is quite different to other mobile processors we have seen previously with its configuration as follows; 2 x Cortex-X1 cores @ 2.8 GHz, 2 x Cortex-A76 cores @ 2.25 GHz, and 4 x 1.8 GHz Cortex-A55 Cores @ 1.8 GHz. The GPU is an ARM Mali G78 MP20. The Google Tensor processor is further strengthened by adding the following to the SoC; A Google TPU, ISP, Security Core and Titan 2, low-power context engine, and caches. 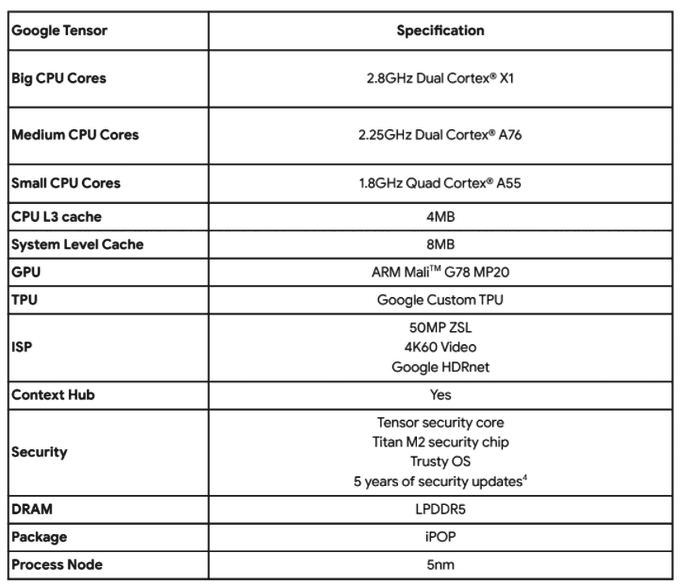 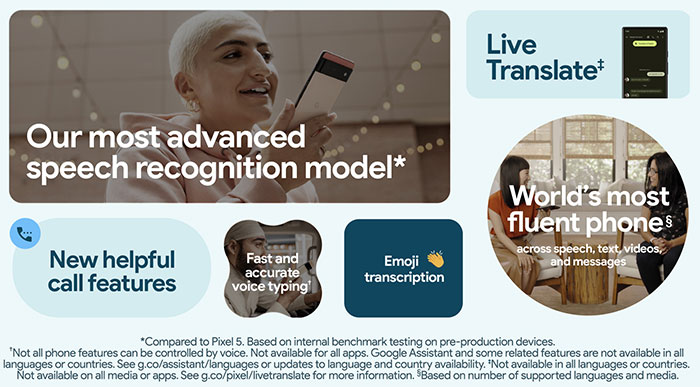 Google hopes to push the Pixel 6 and Pixel 6 Pro not just with the hardware but its unique use of software to make the most of its new custom SoC and high-spec supporting parts. In use, you should see evidence of the hardware and software working synergistically in common tasks like photography (e.g. magic eraser, face unblur, real tone), as well as in features to do with calling, and translating and transcribing live speech. 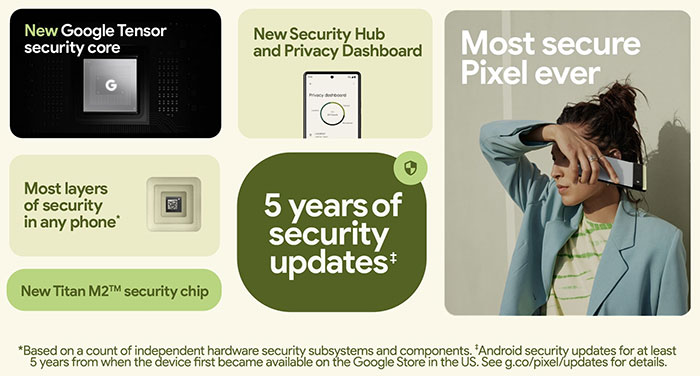 Both the Pixel 6 and Pixel 6 Pro are available for pre-order now at US$599 / GBP£599, and $899 / £849, respectively. US customers can opt for the Pixel Pass subscription at $45/$55pcm for a brand-new Pixel 6/Pixel 6 Pro along with Google One, YouTube Premium and YouTube Music Premium, Google Play Pass and Preferred Care. A new Pixel can be upgraded to in two years time. I note that with the UK pre-orders you can claim a free set of Bose 700 wireless headphones "worth £349.95" with your phone. Devices should be available to ship or to buy directly from 28th October.

Posted by Rob_B - Wed 20 Oct 2021 11:18
I'd been looking for an upgrade and think these are well priced (relatively) although I'd prefer a lower prices vs the headphones!
I'm unlikely to buy one as they're big phones which I don't like but I'm interested in the full reviews when the embargo is lifted.
Someone on reddit has had a play with one in store and posted a few more details and things are looking promising for the camera.
Posted by Kato-2 - Wed 20 Oct 2021 11:27
Notice not a single word on privacy in all of their PR, gee I wonder why…

https://www.bleepingcomputer.com/news/security/study-reveals-android-phones-constantly-snoop-on-their-users/
Posted by Spud1 - Wed 20 Oct 2021 12:53
The pixel line continues to be a bit dull, boring, and lacking innovation aside from the camera setup & potentially the new CPU here.

I miss the days when they were either showcasing the best of android, or offering flagship features for a mid-range price point…they now seem to be taking the apple approach of minor iterative updates at an increasingly higher price at the moment.

Their foldable is the one we should be waiting for imo, to see if they can bring some innovation (and competitive pricing) to that segment. Heck, maybe something “new” and exiting like oh I dont know, a front screen without a hole in it.
Posted by Yoyoyo69 - Wed 20 Oct 2021 16:01
I strongly dislike marketing like this.

Reminds me of the consoles, reserved cores to lock the system down, only of benefit to the corps, doesn't stop them quoting how many cores they're selling you, despite not being able to use them.
Posted by Rubarb - Wed 20 Oct 2021 20:34
I''ll pass…………… I hate phones