You are here:
Cameras Reviews

When I first received this camera I was very impressed with the way it looked, it was nicely shaped and was just about the right size. From looking at it I could see that it was definitely a top of the range webcam. It was a good size unlike some and when it was folded up it would nicely sit on the top of a monitor or any other flat surface. Unlike many of its friends (Creative webcam 3) it also has the feature of being a camera. 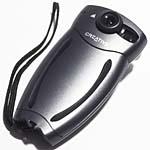 As a webcam it is Capable of taking 16.7 million colours with live video it is capable of taking up to 30 frames a second @ a resolution of 352x288, and up to 15 frames a second @ 640x480, which is a very high standard for a webcam. When the camera is used on the go it can capture still images in 16.7 million colours at the resolution of 640x480. With the resolution of 640x480 the webcam can store 90 images and with 352x288 it can store 200 images, which is quite remarkable for a camera with a 4mb-memory capacity. It also has many other features on the go such as multi-exposure and time delayed capture. Multi-exposed capture is when the webcam takes a series of pictures and you are given a series of pictures in the time period of 5 seconds. Time delayed is when the camera does not take the picture for 5 seconds (so the person setting up the camera can also get into the photo!). With both uses (webcam and camera) it has a focusing lens from 6 inches to at least 5 feet, which is handy if your PC is quite far away from you.

After using the webcam for a while I found out it had one major downside. In the night when my fluorescent lighting was turned on my picture began to loose quality and you could see many dots on the picture. After many hours of tweaking the brightness levels gamma etc... I managed to get the picture to a suitable quality, but I had to change the settings to American 60hz lighting instead of Europe 50hz lighting. This seemed unacceptable for a webcam with a fairly high price tag, it had worse quality pictures in false lighting than some of the much cheaper webcams. After recording various pieces of video footage I was impressed with the amount of video codecs there were to choose from. After trying each on I managed to find one that suited video footage with and without sound at a reasonable file size. The software included only had drivers for windows 98 and so for those windows 2000 users a 16mb download is available from creative.com site. The two main pieces of software included are WebCam Control and Webcam Monitor. The control software is mainly for recording videos and changing settings of the webcam. It is nicely built with many features, all of which catered for my needs when I used the camera. It has many options including video quality, types of colour, settings for volume level on the microphone. Everything that I needed it had so basically I could do almost anything I wanted it to. The monitor software included can do many things that the control can't. It can take short lengths of video when it detects movement in the room, it also has the ability to take pictures at certain time intervals. If I set it up to take a picture every minute it could store the image on your hard drive or even upload to the web. I used the software many times with it uploading to my own personal webpage and it never failed once. 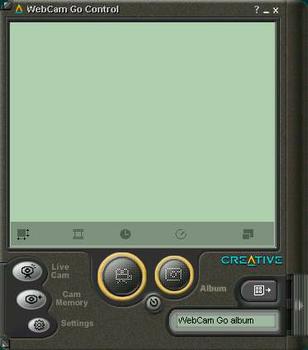 Pro's
It is a digital camera as well!
High storage capacity for the size of its memory module
Focus to set for different distances
Stylish (looks good)!
Easy to set up

I would not recommend this webcam for the ultimate photographer because for it's price it is just not up to competing with expensive digital cameras and besides it's top resolution is only 640x480 which is terrible compared to say a £500-£600 digital camera. On the other hand I would definitely recommend it for a person who is on a tight budget and wants a cheap camera 'which will do the job'. As for someone buying it purely its video capabilities, I would recommend it because it is in suitable price range (roughly £80 +) for high quality video and it comes with the added bonus of having a digital camera as well.