The search for the Kingdom of the Crystal Skull begins in 1957, some twenty years after Jones had his hands on the Holy Grail. World War II has brought an end to the Nazi regime and Jones faces a new Cold-War enemy; the Soviet Union.

The movie kicks off in the Nevada desert. Indy's been kidnapped by Soviet-henchman, Colonel Doctor Irina Spalko (Cate Blanchett), who hopes to discover archaeological artifacts with the help of our hero. Jones is led into the Ark-holding hangar shown briefly in Raiders, and Indy fans will immediately find themselves smiling from ear to ear as Williams' famous "Warehouse" theme marks the first of many references to the movie prequels. 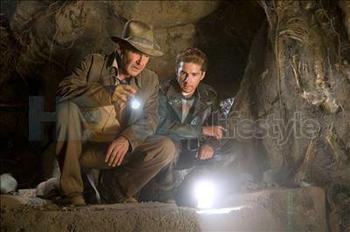 Jones, as you might expect, isn't keen on co-operating with his Soviet captors and makes a typically exhilarating escape. Cue the traditional return to academics and we find Indy back in the classroom, teaching his students as a part-time professor. However, FBI investigations result in Indy being given a permanent leave of absence and our hero decides to leave town. 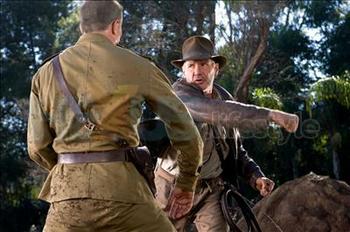 Here-in lies the introduction of one of the movie's more memorable characters, Mutt Williams (Shia LaBeouf), a headstrong kid who's as handy with a knife as Indy is with a whip. Williams tells Jones of a mystical crystal skull, found by missing friend and fellow professor, Harold Oxley (John Hurt). The mission, of course, is for Williams and Jones to find Oxley, the secret behind the skull, and the ancient lost temple of Akator - before the Russians beat them to it.