Welcome to a world without rules

With Batman's origin done and dusted in 2005's Batman Begins, The Dark Knight wastes no time in getting started. The opening sequence showcases a gang of clown-masked men robbing a Gotham bank. Here, we're immediately introduced to the movie's menace - The Joker.

The character, played by Heath Ledger, fills the movie with anarchy from start to finish. The Joker provides a type of nemesis unknown to Batman. Just how do you fight a criminal who has no fixed agenda, isn't looking for money, and quite frankly doesn't give a shit? 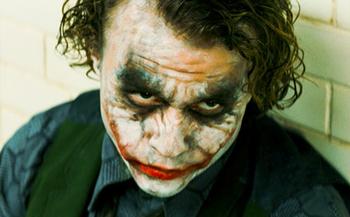 Ledger's agent of chaos is counterbalanced by Aaron Eckhart's Harvey Dent. Filling the role of Gotham's new district attorney, Dent is the ray of hope that the city has been longing for. His squeaky-clean demeanour and eye-catching smile are enough to convince Batman that, with Gotham in Dent's hands, he may soon be able to hang up the keys to his tumbler.

This age-old conflict of good against evil is where The Dark Knight shines. It's the comic-book adaptation that we've been longing for. Gone are the repetitive one liners and soppy love stories. Instead, we're treated to what is effectively a gritty and realistic crime thriller in which the hero just so happens to be a billionaire who dresses as a bat, and the villain just so happens to be a raving maniac. 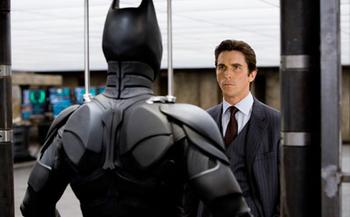 Adding to the feel of the movie is Gotham city itself, presented in a style resembling that of Los Angeles in Michael Mann's 1995 crime-saga, Heat. It provides the near-perfect backdrop for an entirely believable city in which crime has taken its toll.