The similarity to City 17 is quite deliberate as art director for Half Life 2, Viktor Antonov, also worked on the setting for Dishonored. However, this new title is a re-imaging of London in the 1600's and doesn’t depict the post-Soviet harbor city of Half Life 2, which featured mostly Eastern European architecture. Here, structures are more Western European in style - yet Half Life 2’s influences are clear as you stumble across a harbour, cobbled streets and abandoned alleyways.

Taking place in the midst of a fictional industrial revolution, Dunwall is a rat-infested city that is the grips of a plague epidemic. Nonetheless, it’s still teeming with life as bowler-hatted gents go about their daily business trading in Dunwall's most precious commodity, Whale Oil. Each day they run the risk of being hunted down by a pack of hungry rats, who will pursue anyone that gets too close, before feasting on their skin and leaving nothing but a pile of bones lying in the street. There is a hostile atmosphere on the streets of Dunwall, born from a clever mix of haunting audio, moody visuals and the disgusting rat-infestation. That anxiety looks to be intensified by a fusion of slick stealth play and intense action combat. 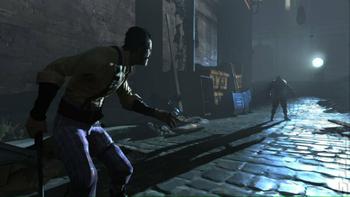 In Dishonored, players step into the role of Corvo, a bodyguard falsely accused of the murder of his beloved Empress. By becoming a supernatural assassin he seeks revenge and justice on those who killed his mistress. Judging by the first ever demo, gameplay will largely involve gathering Intel to clear your name, while attempting to assassinate a number of high-profile targets. The mission we’ve seen, for example, tasks you with taking out a lawyer who is heavily guarded and locked away in a fortified mansion. Okay, so the storyline and kind of missions we’ll end up involved in do seem rather generic, but Dishonored is all about giving you choice - and the open-world design, multi-layer environments and weapon/power variety enables you to tackle these missions in a variety of ways. In fact, with Harvey Smith of Deus Ex fame on board, it’s clear that this inspiration may well have been taken from the popular RPG series.