You can, for example, play the game entirely without killing anyone for a slower-paced, strategic experience that requires use of the environment and shadows to sneak past people. Playing stealthily also involves executing enemies silently and then hiding their dead bodies out of the way so that other guards aren't alerted to your presence. Or you can, if you wish, use your array of sorcery powers and more traditional weapons to attack enemies head-on for a more aggressive play-style. Alternatively, you might opt for a combination of both – the choice is entirely yours.

Abilities, such as super jumps and increased agility, allow you to traverse the city with a free-flowing parkour style, while powers such as teleportation and a rat shape-shifting ability allows you to access areas otherwise impossible to reach. These supernatural powers sit alongside a range of other abilities such as bullet-time and more offense-based powers that allow you to use sorcery in a similar vein to Dark Messiah Might And Magic - another top tier title that Arkane Studios has previously worked on. 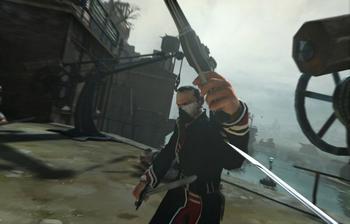 The Chaos system serves to compliment each player’s style too, and depending on whether you side with stealth or combat, the branching storyline arcs in that direction and the gameplay follows suit. This might, for example, make for a more aggressive enemy A.I. if you try and blast your way through. However, the latest gameplay demo really shows Dishonored’s strength as a stealth game, with a lot of sneaking around in the shadows and watching enemy A.I. behaviour before sneaking past unnoticed or committing a stealth kill. The influence of Dark Messiah Of Might and Magic is clear when indulging directly in combat, but creeping across roof-tops and working out the best way to break into the fortified mansion is more in line with the brilliant Thief series. 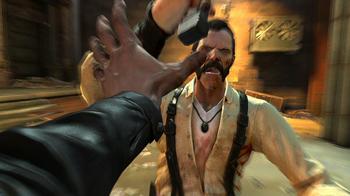 Dishonored is still early in its development phase, but what we’ve seen so far is encouraging. The Half Life 2 inspired locations, the sneaky Thief-style gameplay, and the hard-hitting visual spectacle of the Dark Messiah of Might and Magic-type sorcery looks to be a great combination. It’s also going to be interesting whether the rats that flood the city streets and play an integral role in the game bring something different to the genre, or just out to be plain annoying.