The rising price of video games in the UK has been named as one of the main contributors in boosting inflation rates by the Office for National Statistics (ONS), reports EuroGamer.

The UK statistics body stated that, "smaller falls in transport costs than a year ago — notably for motor fuels and air fares — and price rises for computer games were the main contributors to the rise in the rate of inflation," especially in the run-up to the holiday season. The ONS's Consumer Price Index (CPI) climbed by 1.3 per cent in the year to October 2014, an increase from September's five-year low of 1.2 per cent. Analyst expectations had been for the annual rate to remain at 1.2 per cent in October.

The report also points to a number of new games released in the months prior to Christmas, replacing cheaper titles in the charts and resulting an overall game average price rise of 0.4 per cent between September and October. 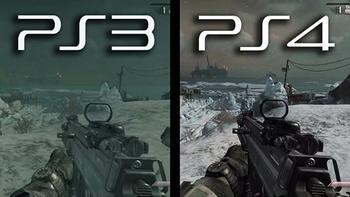 "The arrival of the PlayStation 4 and Xbox One in November 2013 brought with it more expensive games compared to those for the PlayStation 3 and Xbox 360," EuroGamer points out. However, Andry Payne, chairman of UKIE told Eurogamer that he believes the new consoles and games justify their higher price tag, and that the gaming industry has played an important role in driving economic growth in the UK.

"Next-gen console games are arriving in force at UK retail one year on from the consoles' launch," said Payne. "These games are premium blockbusters in every sense, in terms of production values, technological improvements and sheer size. Accordingly they command a higher price tag in UK retail stores and consumers are prepared to pay for these amazing experiences."

Have any HEXUS readers noticed that they are spending more on individual games this year compared to last?

Posted by RobbieRoy - Wed 19 Nov 2014 18:57
I think this is a case of manufacturers taking advantage of the market - new equals more expensive. I wonder if the content is slimmed down as well, as it has been in many food items where £x used to buy y kgs of something but now £x+a is needed to purchase y-b kgs - but all in the same packaging.
Posted by Spud1 - Thu 20 Nov 2014 07:59
Nope I am paying about the same for console games.

When the PS3/XB360 were first launched, i was paying £30-£40 for a brand new game. I am paying exactly the same for new AAA XBO games now.

Given the rate of UK inflation, I am actually paying less for the games in real terms ;)

It's a bit disappointing from eurogamer really as a nonsense story - they are comparing prices to last year, when the PS3/360 were both at the very end of their life, and when games are at their cheapest. If you compare like for like you'll see that the prices are no different. You still get shops asking £50-£60 and shops asking £30-£40 for every title. I guarantee that in a few years when the next next gen consoles are announced, we'll see prices fall yet again.
Posted by kalniel - Thu 20 Nov 2014 08:30

To be fair it's not Eurogamer, it's the ONS and they are saying the increase in video game prices has been significant enough to cause an increase in the officially reported inflation for the UK.

It doesn't really matter whether it's EOL pricing vs new pricing - video games are in the basket of goods used to assess ‘real world’ inflation so if the prices go up then there's a chance the official inflation will go up to. Note that it's still very low and well under target, so anyone using this to complain about higher prices needs to have a bit of a think ;)
Posted by cheesemp - Thu 20 Nov 2014 08:32
My average spending on a game is still the same as last year - about a £5 a game. With steam sales and second hand console games i'm sorted - I've no interest in paying a premium for new titles. Games like Farcry 3 are just as playable now as last year…
Posted by crossy - Thu 20 Nov 2014 08:43

Have any HEXUS readers noticed that they are spending more on individual games this year compared to last?

I've noticed that the price of console games has taken a - in some cases dramatic - upswing. So I've pretty much decided to avoid buying any “just out” console games. In fact, my spending on my XBox this year hasn't exceeded £10. Compare that to previous years where I'd invariably line up for the latest Forza, Assassin's Creed and Call of Duty trio with a Battlefield when available. So that's £100 or more. It also helps that Microsoft's focus is 100% on XBone, with no love for the ole' 360.

On the PC side, I have bought the odd “A list” title (this years “Wolfenstein” was the last one) but won't be bothering with the Assassin's Creed nor CoD - probably leave those until sometime next year.

For both sets of games - yes, the graphics have got better, but conversely I'm reading about a LOT of playability issues, so even ignoring the financial hit maybe the “smart money” is on waiting until there's been a patch (or six) issued. If that also means that the title is then in the Steam/GAME/Asda sale then so much the better…

In the meantime, I'll not be bored since there's plenty of old titles that still have playability (mainly ones I hadn't - ahem - got around to finishing) and failing that, I really should get some guitar practice in. (If for no other reason than to stem the comments like "are you still playing on that damned computer - why don't you go do something productive instead?").