Nvidia has announced that it has expanded the availability of its GeForce Now games streaming service, offering over 2,000 games, in a couple of new and interesting ways. Probably the most quirky of the announcements is that "The World's Smallest Gaming Arcade," situated in an iconic British phone box, is powered by GeForce Now with 5G connectivity. In other news, a recent beta update provided to the Microsoft Edge browser on the Xbox means that GeForce Now can be used on these consoles – if you have a GeForce Now (free or paid) subscription.

As a one-day pop-up venture in Manchester, Nvidia has set up a thoroughly modern arcade in an admittedly ancient but iconic British phone box. These red phone boxes debuted in 1936, according to the blurb I received from Nvidia (so we must be looking at a K6). Nvidia goes on to say that phone boxes in the UK are largely unused, as ownership of mobile phones is very widespread, but 5,000 of these boxes around the country have been repurposed as community spaces rather than sold for scrap or otherwise removed. 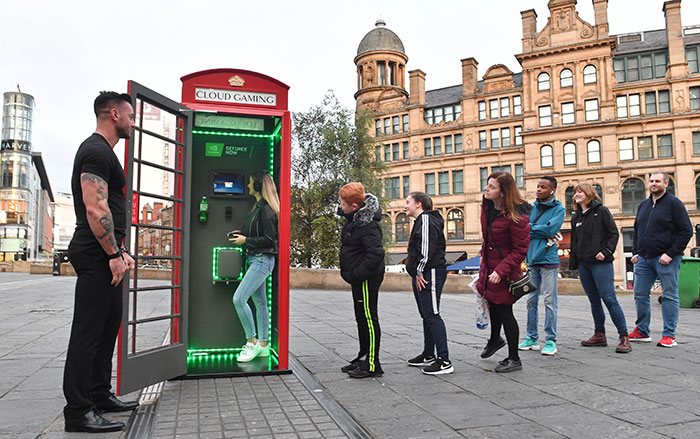 In the Mancunian red K6 you see pictured, 'The World's Smallest Arcade' uses 5G mobile internet and a tablet / controller to play some of the thousands of games available via GeForce Now. Additionally, this 'arcade' includes a fridge for you to keep your drinks cold (hardly necessary for Manchester in late October, a microwave for your pasty might have been better). 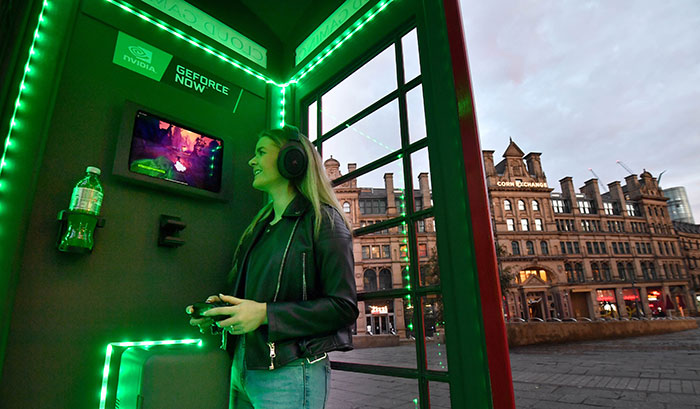 Nvidia's little pop-up event was arranged to demonstrate that "GeForce Now is making high-quality gaming accessible to all via the cloud, while ray tracing and DLSS are no longer being the reserve of those with a GPU and gaming rig".

Nvidia has unlocked its GeForce Now service for Xbox users. This week, a new version of Microsoft Edge became available for Xbox in a beta upgrade, with support for the platform.

This Xbox + GeForce Now solution might find special favour among users as the Edge browser on this platform supports mouse and keyboard input, giving users the benefit of controlling games this way rather than relying on controllers. However, as you can see from the video captured by The Verge's Tom Warren, below, the response in games seems somewhat laggy, at least for now.

You can now play Steam PC games on an Xbox with Nvidia’s GeForce Now. Here's a quick look at how it all works. Details here: https://t.co/EMGX0HRxcT pic.twitter.com/G6YcloBubM

The Verge notes that Microsoft's head of Xbox, Phil Spencer, has recently committed to bringing full PC games to the Xbox via xCloud. For now GeForce Now is the best alternative, and it will hopefully be improved / refined in the coming weeks / months.

Last week, Nvidia introduced GeForce Now RTX 3080 membership level streams, with up to 1440p resolution and 120 frames per second on PCs and Macs. I'm not sure how well this would play on the beta browser on the Xbox, or whether it would be worth paying extra right now.

Posted by maverick77_uk - Wed 27 Oct 2021 13:01
It appears to be the same girl standing in the same position in both photos - one looks to be the middle of the day, the second early evening as the lights are on. Has she moved??? Looks like the eager queue have either got bored and moved on, or have been given their £5 to stand there looking eager for the photo and gone off to spend it! :))))
Posted by Darkedge - Wed 27 Oct 2021 13:52
Painfully fake and posed, so she enjoys gaming by looking at the screen out the corner of her eye? Tipical Team Green ridiculous PR.
Posted by quatermass - Wed 27 Oct 2021 17:49
Not a real K6 once the door hinges have been removed. Those doors were a bitch to open!
Posted by Rubarb - Wed 27 Oct 2021 18:23
Used to be a saying “slags sell mags” think that from pc format magazine who always had a girl on the front cover.
… just trying to think of anything that rymes with xbox or cloud ?
Can't think of anything but I agree it's fake as hell PR.
Posted by Ttaskmaster - Thu 28 Oct 2021 12:39

Rubarb
Used to be a saying “slags sell mags” think that from pc format magazine who always had a girl on the front cover.
… just trying to think of anything that rymes with xbox or cloud ?
Can't think of anything but I agree it's fake as hell PR.

Really??!!
I've come up with several in under two minutes, and they even rhyme… I can't post them here as they're exceedingly lewd, to say the least, but it makes me wonder if I'm in the wrong industry.