During the InnovatiON 2021 event, Intel shared the first video footage of XeSS technology as applied to currently available gaming titles. Hitman 3 (released Jan 2021) was shown off during a segment hosted by Roger Chandler, and The Riftbreaker (released earlier this month) by Lisa Pearce. Unfortunately, all the footage available from the event is a max 1080p60, so it isn't optimal for pixel peeping. Intel will upload 4K footage at a later date.

Hitman 3 is a well-known AAA title, so it is a good game for Intel to demo with so early before its graphics cards and supporting tech like XeSS arrive. The underlying Glacier engine doesn't support rival super-resolution technologies like Nvidia DLSS or AND FSR, so you won't see any such comparisons, for now. Instead, Intel looked at comparisons in imagery in example footage such as 1080p vs 4K XeSS, as below. 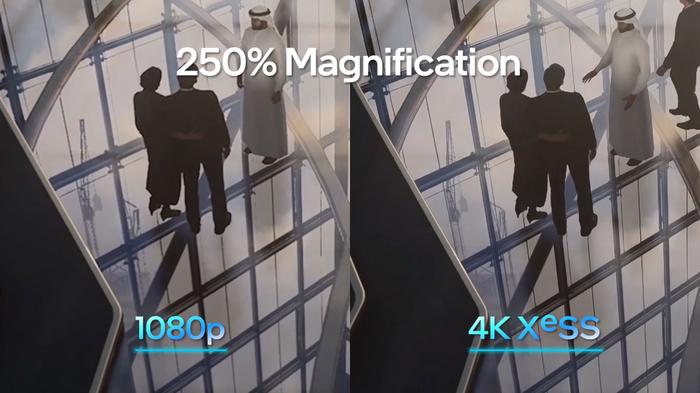 Remember, XeSS is viable on other GPU brands, so an update now might benefit AMD and Nvidia users, but Intel has no reason to get IOI to implement XeSS as yet. The Glacier Engine is supposed to get real-time raytracing implemented at some point, too.

The Riftbreaker by Exor Studios already has AMD's FSR settings in its graphics options. It becomes the first game we know of with both FST and XeSS, so it would be good to pixel peep at such comparisons. In the event demo, though, we saw Intel again choose to major or 1080p vs 4K XeSS powered graphics. You can easily see some detail improvements if you look closely at the magnified stills. 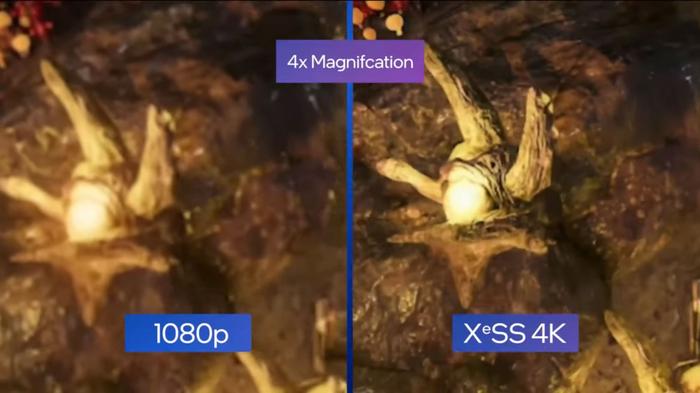 Intel announced its XeSS DevMesh program for developers, allowing early access to test its supersampling technology. Things are thus looking quite good for some XeSS enhanced games being ready for the launch of the first Arc Alchemist / DG2 GPUs. Intel confirmed that the first Arc Alchemist graphics products are coming in Q1 2022, but it isn't certain whether this will be mobile dGPUs or both the mobile and desktop Xe-HPG based products.

mazzy2u
If they can get a competitive card, priced decently and has good availabilty,

loftie
Having a look at the video, and thinking that I don't really like the lighting changes in Metro Exodus when they turned on RT.

All I'd say is don't judge it based on a crappy, compressed YT Videos…
Posted by lumireleon - Sat 30 Oct 2021 06:53
With over 100,000 employees Intel is a formidable giant that can pull off something new EXTREMELY fast.