First blood! No, not Unreal Tournament, but the man, the legend, Rambo himself is set to storm his way onto consoles following the acquisition of rights from film company StudioCanal by UK-based publisher Reef Entertainment. Battling through a whole army of competition, the deal gives Reef license to develop several titles based on the hard-hitting, take-no-prisoners, action-packed Sylvester Stallone movies. 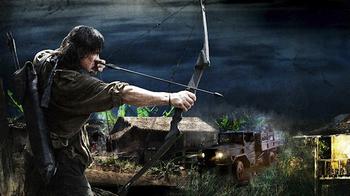 "I am a big fan of Sylvester Stallone movies, and when we had the opportunity to secure the video game rights from StudioCanal for the Rambo franchise, we had to grab it with both hands," said Reef Entertainment CEO Peter Rezon.

"With the success of the most recent Rambo film, and an international appetite for action movies with Expendables 2 scheduled for release next summer, we felt now was a good time to do something special with this licence."

Craig Lewis, commercial director at Reef added: “We have big ambitions for Reef and the Rambo IP is the first step in establishing us as a worldwide player."

"Rambo will be a triple-A title on PS3, Xbox 360 and PC and will capture the gritty atmosphere and full-on action which made the Rambo movies so successful."

We'll keep you posted as soon as more details emerge.

Glad it says its on ps3/pc/xbox, however time will tell if it really can be a good game, i suspect it will be like em a serious sam style game but we shall see.
Posted by Deadlight - Sat 06 Aug 2011 09:46

shaithis
the original was one of my favorite c64 games!

I bought this for the Spectrum. It was an Ocean game, wasn't it? About that time Ocean were churning out movie tie-in game one after another.
Posted by DavidM - Sat 06 Aug 2011 11:21
Yes, but this was one of their better ones.