You are here:
3DS Previews

3D on the small screen

Over the next few years, 3D Gaming is going to become huge. Well, that's the message we're getting loud and clear from E3 this year with Sony promising to deliver titles that will appeal to both core and casual gamers and Nintendo showcasing its brand new hand-held, the Nintendo 3DS.

The fact that you'll have to buy a 3D compatible T.V to take advantage of the PS3 3D-enabled titles is much more of a gamble, but Nintendo have kept things nice and simple creating a revision to the DS which is bound to appeal to the mass market. You'll only have to buy the hand-held, nothing else, and you won't even have to wear 3D glasses. It already looks like Nintendo is onto yet another winner.

The Nintendo 3DS comes with a 3.53-inch top screen and a 3.02-inch bottom touch screen. It has three cameras - one inner and two outer - to deliver the 3D effect and take 3D pictures. It includes a motion sensor, a gyro sensor and even a Slide Pad that allows 360-degree analog input. The system will also have a "Movie Record Mode", and will have the ability to play 3D video content.

It will be compatible with both Nintendo DS and DSi games, and a new generation of 3DS games: launch titles include Kid Icarus: Uprising and Mario Kart 3DS, and more than twenty companies have signed on to develop for the 3DS, currently supporting a list of over 70 3DS titles.

The 3DS possesses Wi-Fi capabilities and periodically searches for Wi-Fi hotspots and other 3DSs without user input. The 3DS will also be able to receive data from the internet or other 3DSs while in sleep mode. Also, there will be no monthly fee for Nintendo’s 3DS online access. The system has been shown in three color schemes: black and blue, black and red, and black and grey. A launch date has yet to be revealed.

At the E3 Expo, Nintendo showed attendees a range of games and applications for Nintendo 3DS that reinvent some of the industry's most beloved franchises. These include:

* Mario Kart, which shows off the potential of driving and tossing bananas in 3D.

* nintendogs + cats, a new version of the best-selling nintendogs franchise that lets players interact even more with their virtual puppies - and kittens

* Animal Crossing, a new installment of the charming community-building franchise. 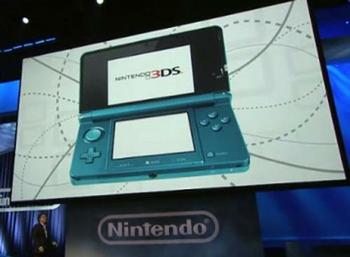