Zombies bodies pile up on screen

The controls feel tight. You can switch through your weapon set quickly and there’s no sign of problematic camera angles that plague some games of this type (see Monster Madness: Battle For Suburbia for details.) You can also rotate 360 degrees quickly and intuitively, which is just as well because the sheer amount of zombies on screen is quite incredible. You'll see one and then another lumber toward you from behind a trash can, and then all of a sudden there's dozens of them heading your way and you've only got one clip left in your SMG, so you lob a grenade toward the pack, switch to your shotgun and frantically start blasting away while buzzing around desperately trying to stay out of their grasp.

In this pre-alpha demo we were given access to a conventional set of weapons, including a rifle, a shotgun and a SMG and the Sony representative was unsure whether the finished version will feature any off the wall firearms, but assured us they’ll be a lot more weapons to choose from.Aside from weapon-based combat there's a satisfying melee attack that you can execute when you're surrounded, which amusingly can knock a zombies head clean off or cause a domino effect on those around the pack. It's also fun to use the environment to your advantage, setting fire to a car and watching zombies catch themselves alight, or targeting an exploding barrel and watching limbs fly everywhere.

Dead Nation is quite a gory game. There’s a lot of blood, a lot of guts and a lot of flying body parts, especially when you toss a grenade into a group of enemies, or they step on a mine. You’ll even see torsos from zombies that you have blown in half dragging themselves across the street to reach you. Gameplay generally involves buzzing around utilising the full 360 degree angle to dispatch any zombies that head toward you, but the pace of the gameplay shifts cleverly giving you some slower-paced moments to explore and find loot, and then all of a sudden exploding into a frenetic sequence of events as you frantically try and clear a path through the zombies. 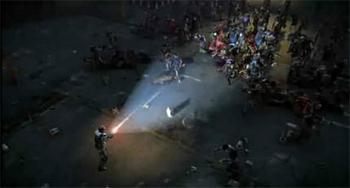