Zombie bashing in an idyllic setting

Few reveal trailers grabbed people’s attention like Dead Island’s masterpiece earlier this year, which captured the carnage and chaos of a holiday from hell in some style. To say we were looking forward to seeing more from Techland’s zombie hack ‘n slash action adventure was an understatement.

Beyond the initial hype, however, subsequent snippets of gameplay footage, feature lists and hands-on previews from E3, have prepared us for the realization that Dead Island could be just another zombie survival shooter. However, we haven’t given up hope just yet. The promise of a deep storyline, some excellent visuals and the addition of online co-op suggests that this zombie masher may still go above and beyond what many other zombie-themed games have to offer.

Based on the footage we’ve seen so far, the first thing that strikes us about Dead Island is the setting. There's not a dark corridor or dimly-lit street in sight; instead the pacific paradise island of Banoi looks magnificent bathed in light and adorned with palm trees. As a result, when the zombie outbreak suddenly rips apart the island with unspeakable horrors it offers a dark and bloody contrast to the sandy shores and clear blue waters. Dead Island takes place in an open-world setting with dozens of side missions, so exploring the island will undoubtedly be part of the fun, and this unique setting has certainly become part of the game's appeal. 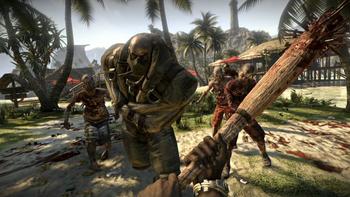 The stunning beaches of this tropical paradise were supposed to be the idylic setting of a holiday of a life-time, however, things don’t quite turn out as planned. The story begins with a couple flying to the vacation of their dreams when their plane crash lands on the island. Your wife is missing after the crash, so players are tasked with searching the island for her whereabouts. Gameplay combines first-person action with melee combat, but we’re also promised deep character development and a range of customisable weapons that will attempt to make zombie killing feel unique and varied.