Are we blown away with Codies new shooter?

Played - Xbox 360 version
Destructible videogame environments aren't really a big surprise any more. Developers have long been creating incredible terrain deformation that blurs the boundaries between videogames and reality with bullets that leave dents in car bonnets and buildings that collapse and crumble impressively, creating a realistic impact on the environment all around them. Red Faction Armageddon is undoubtedly the daddy of destruction this year, but let’s not forget the pioneers of this particular skill - Space Invaders with its fortresses that crumbled under the pressure of the mighty laser! It’s fair to say we've always liked destroying stuff; it's just got more visually impressive, that's all.

So, making environments and objects that realistically tear and shred apart is not a new videogame concept, but increasingly it has been used more and more, often becoming an integral part of the gameplay. The latest game to use the word “destructible” as a selling point in its marketing campaign is Codemaster’s Bodycount which, on the surface, looks like a generic first-person shooter. There is, however, a lot more to it than run-and-gun gameplay - it also employs a reward system and a unique (sort of) cover system that allows you to use anything as a temporary shield. "Temporary" being the operative word as most cover can then be blasted to pieces as if it never existed in the first place. 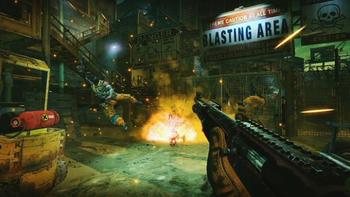 Based on the three levels we’ve played so far, it does seem Codemasters has focused less on AAA graphics (Codies clearly didn't have a Modern Warfare 3 budget) in favour of some solid level design and meaty gun play. Indeed, Bodycount is chaotic, and deliberately so, with incessant gun-fire creating a sense of urgency, in addition to A.I. that puts up one hell of a battle and some hazardous environments (keep an eye out for exploding barrels.) Taking all of that into account, you have the makings of a very decent shooter that has the potential to really shine. In our eyes at least, average graphics aren't a bad thing just as long as the gameplay shines brighter.

Gameplay in Bodycount involves killing local militia, lots of them. You do this while attempting to get from ‘A’ to ‘B,’ infiltrating heavily-guarded enemy encampments along the way. Bodycount opens up a variety of strategic options by creating an open-world environment rather than a corridor-style conflict, so levels can be tackled in a variety of ways thanks to multiple pathways through each location. Grenades and mines can be cannily tossed and placed for maximum death-counts, while a plethora of weapons, from assault rifles - ideal for long range shooting, and shotguns - for short-range blasting - complete a familiar weapon-set.