We’ve only tested out a few weapons in Bodycount, but it’s clear Codemasters has worked very hard on their design and feel. The shotgun is a lot of fun to use at close quarters, sending enemies absolutely flying with its powerful blast. The recoil is immense and it does feel like you’ve got a really potent weapon of destruction in your hands. The G38 Assault Rifle too is great at peppering enemies from a distance (Tony Montana style) and once again recoils impressively as the muzzle flashes so intensely that it blinds your vision temporarily. We’re keen to see what other weapons Bodycount has up its sleeves, but the signs so far are very positive and the guns have the potential of being the real stars of the show.

The new cover system is also impressive, though it does take a little while to get used to because it feels so different. A press of the left trigger roots you to the spot and you can then move the analog stick in ant direction to peek. You don’t snap into cover, so even if you’re standing out in the open you’ll just grind to a halt and can then bob left and right, but it also means you can use anything to hide behind. There’s a couple of twists to the usual cover mechanic too. Usually a cover system is utilised for exactly for what you’d think - providing cover when you most need it and to gain an advantage over enemies walking in your path. In Bodycount, however, it can be just as much of a hindrance as a help.

Most of the cover in the game is shreddable , so the longer you hide behind a fence or a wall the more chance you have of dying as it disappears in front of your eyes from the impact of gun-fire or grenades. Also, when you hold the trigger your character immediately stands still and the iron-sights zoom in, so you actually get more precision and a steadier aim so that you can pick off an opponent. That means that you can never camp too long, but the benefits of using it – the ability to exert more precision and therefore kill more quickly – are worth taking that gamble for. We used it frequently in the three levels we played and we enjoyed that balance of reward and risk that you glean from using it. 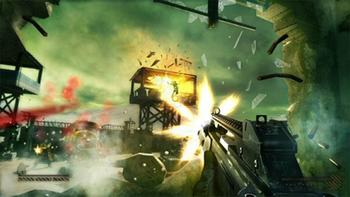 Based on the levels we've played, Bodycount is going to provide a real challenge while playing solo. Enemy A.I. is quick to react to situations and militia adapt their tactics based on how you play. After dying in the hands of the Psycho a few times – that’s the angry dude wielding a chain-gun that you may seen in some gameplay videos - it was refreshing to see that he didn’t follow the same behavioural pattern over and over again. Instead we had to change our own tactics on each retry. This goes for other situations too, where A.I. moves and responds well to your movements, grenade throws and “lean and peek” tactics. It's an encouraging sign that suggests that there's replay value to be had out of each level and extra fun to be gained through playing co-operatively.

Replay value is also encouraged via a scoring system at the end of each level, where you get ranked based on your performance. It's hard to tell exactly how you're ranked as it doesn't break it down at the end of the level, but we'd guess it's based on the skill shot system, which rewards you for different kill-types, such as headshots, stealthy attacks, and grenade kills. We've played too little of the game to make a firm decision on whether the skillshot system will be as exciting as it was in Bulletstorm (we'd guess not) but it's definitely here to encourage you to experiment and cause as much chaos as possible.

And, there's certainly going to be no shortage of all-out explosive actiont - the action in Bodycount is frantic and fast-paced with bullets constantly whizzing past and explosions going off left, right and centre. In fact, you can't help but rush around amongst the chaos and are even encouraged to do so by darting around collecting orbs that spray from the bodies of the dead, gifting you with ammunition, health and even short bursts of invicibility.

Our first hands-on with Bodycount hasn't quite blown us away, but there's no doubt that its guns are epic, its A.I. sharp and the chaos all around you absorbing. The cover system too makes what would have been some standard shooter gameplay feel different and unique, and co-op gameplay should be a real highlight as you join forces to cause mayhem on an unprecedented scale. If Codemasters can muster together a multiplayer mode that's as frenetic as the campaign promises to be, then there's no reason to doubt that Bodycount will provide plenty of thrills and spills; at least until the big gunners (Battlefield/Modern Warfare) arrive later in the year.

bigsnake123
Could I ask why there seems to be so many reviews of games at the moment?. A genuine enquiry. Thanks

Simply because its that time of the year in the gamers Calendar when all the big guns come out to play October / November always big time for games releases so all the reviews are naturally building hype as always.
Posted by andrewtorr - Tue 16 Aug 2011 21:40
i think this looks great