I ear it's alright that Reservoir Dogs

The controversy surrounding Reservoir Dogs was inevitable. The game has already been banned in Australia for 'frequent depictions of violence' and British police chiefs have also stepped forward to condemn the torture and murder of police officers . The viral marketing ploy that featured a foul-mouthed scene from the film, exchanging the main characters for a granny and two kids, was perhaps a step too far, but we're not going to criticise the game for being too violent, because the fact of the matter is...it's not.

We had the chance for some exclusive one on one time with the Xbox version of the game and were actually disappointed that it wasn't more violent. It's true that we only played through one full level of the game, but there was nothing that we saw that shocked us, offended us or disturbed us in anyway. Mind you I've seen the HEXUS.gaming editor in his y-fronts so nothing disturbs me. (Ed...They were briefs.).

Reservoir Dogs allows you to play as the six characters from the film. For those who may have never seen the film back in 1992 it involves a gang of thugs who have been brought together to carry out an armed robbery on a diamond store. The plan goes drastically wrong when the cops turn up, which results in four of the gang escaping back to their warehouse rendezvous point where tensions spill over as they try and work out which one of them is the undercover cop.

If you're expecting to play through every scenario of the film you'll be sorely disappointed. Basically you'll be playing through an interpretation of what may have happened in the events leading up to and following the break down of the heist and you'll play Reservoir Dogs from the perspective of each character. 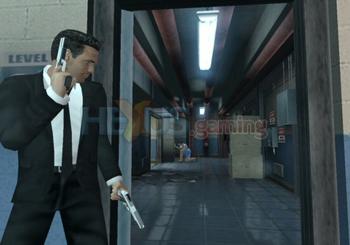 We played through level 8 of the game which was entitled: Pick up the Stones and was from the viewpoint of Mr.Pink. The level involved navigating through a railway yard and evading, or killing the cops to reach the stones. What became immediately apparent is the fact that the language is filthy, but we love that, it makes us feel hard and there's so much humour in the script that it's totally excusable and wouldn't work if they were chatting away like two old ladies at a bus stop.