Coerce the NPCs and take them hostage

The game is viewed from the third person perspective and the control of the character and other NPCs is extremely responsive. That's right, as well as controlling Mr.Pink you can also coerce other characters and move them with your right thumbstick! Reservoir Dogs actually rewards you for non-violence and the intuitive threat system allows you to take hostages to move through the level and manipulate them in order to get past those troublesome coppers. As a reward you'll receive a higher level of professionalism in the end of game stats and fill up your signature move metre at a faster rate. Hostage taking works like this. Point your gun at an NPC and press the 'Y' button; this will alert them that you're waving a gun in their direction. You can then move them with the right thumb stick into position and press 'Y' to position them up against a wall or train carriage where they'll immediately go into the suppressed position. This is called 'coercion' and throughout the level we experienced no problems in moving and coercing one character to the next both smoothly and rapidly. 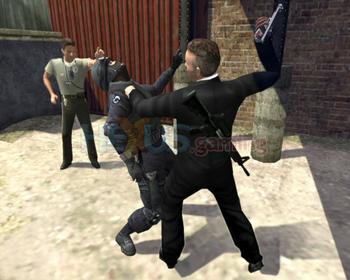 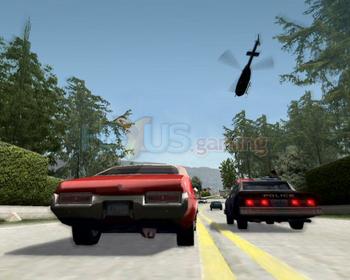 'Coercion' becomes more complicated when you're facing the police rather than an unarmed member of the public. You'll have two ways to deal with this, either slaughter them in cold blood, or grab an unarmed hostage to use them as a shield. From this point you can then manoeuvre through the whole level with one hostage. The police don't give up that easily though, so you'll need to think of something else. Of course, it's obvious when you think about it. By pistol whipping and physically abusing your hostage the police will take more notice and disarm. This can be achieved by pressing the 'B' button, but you'll have to watch his health meter in case you totally knock him out and find yourself withough a shield.

Once you have a secure hostage and have used him to manipulate the police, you can then 'coerce' the police into a position away from their guns and suppress them up against a wall where they are out of harms way. Sound complicated? It's not. It literally took us about 10 minutes of gameplay before we were switching between police officers and moving them into position. You can even lock police in train carriages or guard huts by simply moving them into position and pressing the relevant button to make then open or close a door. As mentioned earlier, for every person that you successfully coerce, your signature move meter fills up. 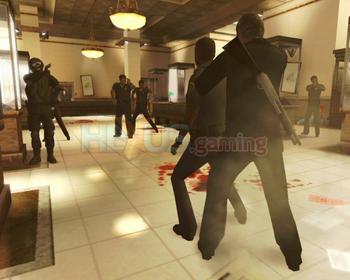 The signature move was definitely one of our highlights of Reservoir Dogs. It allows you to suppress multiple enemies by unleashing a vicious attack on your hostage. Each character in the game has a different signature move that results in a short cut-scene which shows you taking out your anger on the hostage. There was hardly any blood and it wasn't half as violent as we thought it would be, but it's a crucial method of suppressing your enemy if you become overwhelmed.

It's not necessary to move through the level coercing and suppressing anything that comes across your path. You can choose to plough through all guns blazing, but it's far more difficult than it sounds, especially when the S.W.A.T team land with around a dozen enforcers. 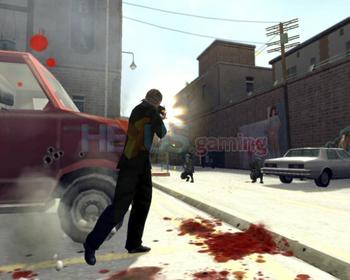 The linear nature of the level means that you don't need a map and you'll never get lost and the A.I react remarkably well to each situation. For example, turn your back on an unarmed guard and he'll go sprinting off to raise the alarm or head for the nearest weapon that may have been dropped.

Graphically, the level we played was fairly bland. Character's animated well but there was nothing that blew us away and a brief look at the screenshots in this preview demonstrates some of the blocky graphics, althought the outside environments do look like they've been improved and we were assured that the build we played wasn't the final one. The audio on the other hand is a whole other ball game.

Reservoir Dogs features the full sound track from the film and the voice of Michael Madson as Mr.Blonde. The script and the voice acting are superb and humorous, as well as being down-right filthy. If you're a fan of the film it's worth buying it for this fact alone. 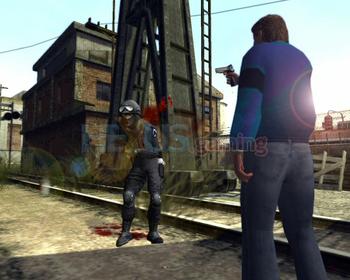 We're not totally convinced about Reservoir Dogs. We like the signature moves and coercion is a fun idea but it became far too repetitive. Having five guards in front of you and having to go through the same routine over and over again was a chore, even after just one level. We know there's a lot more to Reservoir Dogs, such as the driving missions that were mentioned, but until we actually play them we're remaining sceptical that the game will be anything but average. The fact of the matter is Reservoir Dogs will sell well no matter what we say.

And a Deep Dive trailer has been shared with seven minutes of gameplay.

Update delivered in wake of complaints that PC game became too big for a 250GB SSD.