Where's the PC face mapping then?

First off, let’s look at the front end which, though having a bit of a makeover is pretty much the same as all the previous Tiger Woods PGA Tour games before now. You can adjust graphics sound and gameplay options, access you golfer and change his or her stats, access tournaments and do all the usual stuff.

Now Steven is reviewing the Xbox 360 version and he’s told me that in there you can use the Xbox 360 camera to map your image to your golfer’s face. So I’m now sitting here, looking at my webcam and wondering why I can’t do that in the PC version of Tiger Woods PGA Tour 08. Nope, I’m not missing anything, it just isn’t there. Ok, no matter, let’s just go to the golfer set-up and use EA’s Game Face to create my likeness… except this has been chopped down from even the 2004 version of Tiger Woods PGA Tour so getting someone looking even slightly like you is going to be damned hard.

What is it with trying to fix stuff that ain’t broke? Though the system is the same as in previous Tiger Woods PGA Tour games, EA have chopped about with it making customising your golfer to get them looking like you damned difficult. Ok, how my golfer looks isn’t really that important, so let’s move on… 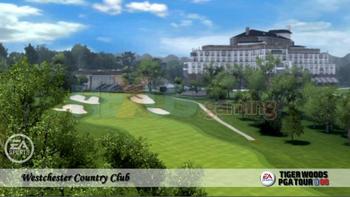 In the Game Face section is where you can do all the usual other stuff such as dressing and equipping your golfer, but unlike previous Tiger Woods PGA Tour games where you’d unlock new items, it’s all here ready for you, right from the off. This takes some of the fun out of the game itself and yes, I know unlocks aren’t the reason you’ll play a golf sim like this but they did add in a bit of much needed oomph to keep you playing… without them Tiger Woods PGA Tour 08 feels a bit like you’re playing just for the sake of it.

Also, now missing from the equipment selection is any sort of info on the attributes of the variety of clubs, balls, shafts and grips on offer. Now I have a fast swing using the TrueSwing method, so flexible shafts are the way forward for me. Tiger Woods PGA Tour 04 taught me that… however, with no description, I can’t tell whether the Nike Ignite X Flex are the whippy ones or are they the Dunlop Harrison Striper XL S shafts? Seriously, if the clue isn’t in the name, you’re stuffed trying to fine tune your equipment to your playing style.

So let’s just go with all the standard stuff that comes as default and get out there and whack some balls about.