The Medal of Honour series is now into its eight year with the release on March 30th of Medal of Honor:Vanguard for the Playstation 2. The franchise has attracted a huge fan base over the years due its cinematic qualities and range of authentic war time weapons, but sadly, on the PS2 at least, the Medal of Honor series appears as though it’s now on its last legs. Following the release of the PS3 earlier this month, with its shiny black exterior and next-gen graphics, even the PS2 unit itself is looking rather exhausted and sad in comparison. For the time being at least there are still plenty of games being churned out for the PS2, some of which do still look great, including the recently titles Final Fantasy XII and Okami, but EA’s latest offering suggests that their minds must have been firmly fixed elsewhere. Maybe they’ve saved all of their efforts for Wii version, also out this week, or future PS3 incarnations? Let’s hope so…

Set against the backdrop of World War II, Medal of Honor Vanguard throws you into the role of Frank Keegan, a corporal in the 101std Airbournce division. As you embark on your first parachute jump into battle, landing just off the coast of Sicily, you’ll take part in a number of European operations taking you across France, the Netherlands and finally culminating in Operation Varsity in Germany, the single largest airborne drop in history.

The storyline in MOH: Vanguard is bolstered by some impressive cut-scenes and documentary style introductions that precede each of the missions. The voice-over teaches you a few interesting snippets of information on how America apparently won the battle on their own (of course they did), which is all well and good and fascinating if you enjoy learning about yesteryear, but ultimately it’s the gameplay that matters and unfortunately, aside from the occasionally mildly enjoyable shoot-out, the missions, the poor map design and the linear gameplay does little to get your adrenaline pumping. 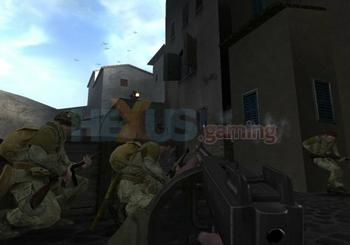 One of the new additions to the franchise means that you now drop into each mission on your parachute. There are heavy restrictions on where you can land, but rather than starting at a pre-determined point on the map at least you can now steer down to and land on a certain roof tops or aim for the safety of a barricade before the bullets begin to ricochet off your helmet. Despite this hard and fast introduction to each level it’s a fairly poor attempt to make MOH: Vanguard more exciting than it actually is; the truth of the matter is that the gameplay tastes well passed its sell by date and the stale, shop-worn graphics do nothing to create an authentic war-time atmosphere.