Though battling through the hordes of Helghast often requires a tactical approach, there’s also a range of impressive melee attacks which are a lot of fun to execute. Occasionally, or quite often in my case, you'lll want to break cover and make a dash forward just so you can ram your thumbs through the eyes of a Helghast troop or slit his throat and run away cackling. Combining melee attacks with some of the powerful weapons you get to handle, such as the W.A.S.P which unleashes three heat seeking missiles that can blow up an enemy tank with little effort, makes for an intense campaign that comes complete with many impressive set-pieces. Nonetheless, Guerrilla hasn’t taken the style over substance approach, and does well to switch things up nicely so you never feel like you’re just doing the same thing over and over again.

There are sniping missions, for example, where you can stand back from the action and pin-point other snipers in surrounding buildings; stealth missions, where you sneak through the jungle avoiding the Helghast patrols, snapping necks or using the silencer on your weapon to reach the ISA camp undetected; and on-rails sections, where you hop into the likes of a tank, or a spacecraft and blast away furiously at chasing enemies. There's an epic boss battle against the powerful and heavily armoured walker known as the MAWLR, and the opportunity to use a variety of weapons that change the dynamics of the game, such as the flamethrower, or the brilliant Helghast jet-pack which gives you a totally different perspective and unique advantage over your enemy. 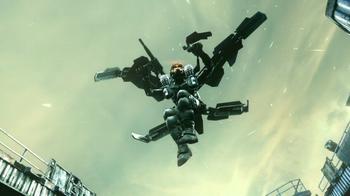 It's on the ground, however, where the fighting really excels. The improved cover system works well, allowing you to slide into cover, peak over the top of objects and immediately zoom down your sights. And you can snap out of it quickly to get from one cover spot to the next with little effort. Enemy A.I. reacts intelligently, ducking behind cover, switching spots if you've got them pinned down and throwing grenades at your feet just when you’d got yourself comfortable. Playing Killzone 3 on anything other than Recruit difficulty ensures that you'll face many rewarding and challenging sections that provide plenty of thrills along the way.