Battling overwhelming odds in the fight for human survival

In the lead up to the launch of Killzone 3, the words ‘bigger’ and ‘better’ echo around the web like Helghast bullets from an SMG. With lessons learned from Killzone 2, developer Guerrilla Games has tweaked its first person shooter to deliver a more responsive control scheme, while offering a wider array of environments and gameplay styles that encourage tactical variety. And, carrying on the good work from the last game in the series, the Killzone franchise delivers another cinematic experience that only developers with a big budget behind them have the power to deliver. On all accounts, after completing a gruelling nine chapter campaign, Killzone 3 is most definitely ‘bigger’ and ‘better.’

Predictably, Killzone 3 looks gorgeous with many stunning landscapes - most notably a meticulously detailed off-shore oil rig that is surrounded by a wild, tempestuous sea which crashes violently up the sides of the huge metal structure. From cluttered scrap-yards littered with dozens of cover spots, to the ISA camp hidden in the depths of a poisonous, plant-infested jungle - where you sneak through the tall grass to avoid detection - there’s plenty of variety, despite many of the typical first person shooter traits. Tight action-packed arenas, such as the Stahl Arms research facility offer close-quarter thrills, while the rooftops of Visari’s Palace give you a great opportunity to sit back and snipe. All locations without exception are beautifully designed, but more importantly encourage you to adpot a different tactical approach. 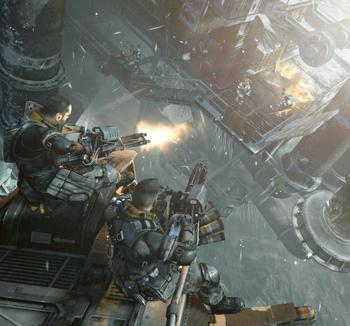 The impressive rag-doll physics from the last game return, making every kill an impressive visual treat as bodies topple from balconies and fly through the air from a well-placed grenade. Guerrilla has taken things a step further than the last game by giving you the freedom to destroy parts of the environment - so now the explosions you cause from perhaps mowing down parts of a rig with a chain gun have a cascading effect on everything around it. If one thing collapses and smashes onto something else then that in turn falls and impacts on the surrounding area. It adds little to the gameplay, but nonetheless it’s mindless fun to be able to carry out such destructive things, like jumping into a tank and bringing towers of Helghast guards toppling to the ground.