One of my long running gags has been with the Final Fantasy series… as in it’s a bit of a misnomer to call it Final
So just as we were all braying about how we’d secretly been into Manga since forever, FFVII comes along and lights a serious fire under JRPGs and everyone loved it. But the Final Fantasy series, having made such a bold statement in its style and design was then kind of trapped… to move away from the strong Manga inspired imagery would be akin to watching the Queen glassing someone in a pub fight… there’s an expectation to be upheld… even if that is to the detriment of the series. 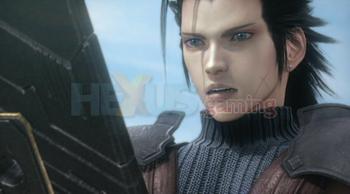 Which is where the Final Fantasy series has gone off the rails for quite some time now. It’s all well and good giving us mystical powers, pretty good combat action and wrapping it all up in action cartoon graphics but I’ve grown up a bit now… and just as I’ve laid aside my Fighting Fantasy books, I’ve grown away from Final Fantasy. And with Crysis Core I’m wondering if Square Enix knows that the series has reached an end as this is possibly as nostalgic a trip down gaming memory lane as you’ll find outside of a bumper ZX81 compilation pack.

That’s not to say that what on offer in Final Fantasy: Crisis Core is actually bad but I can pretty much guarantee that there is absolutely nothing, nothing at all in here that will grab you other than to perhaps be briefly and infrequently reminded of previous happy hours playing earlier games in the series. As a memory jogger, Final Fantasy: Crisis Core works extremely well but as a game in its own right it just comes across as average. 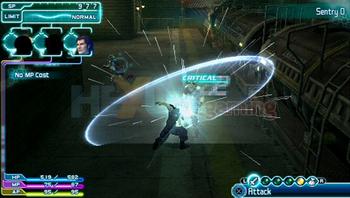 You play the part of Zack, a youthful, over-eager, over confident and, frankly, annoying little sod under the wing of Angeal, who in turn mysteriously disappears, and then Sephiroth comes along and some other chap drops in and erm… well, I kinda got lost in what I was actually supposed to be doing. I would love to be able to tell you that Final Fantasy: Crisis Core has a deep, involved storyline that ties-in as part of the Compilation if Final Fantasy VII but other than a few obvious references and back-story fillers, I’m not at all sure what the hell is ‘sposed to be going on in here.

It’s not as if there’s a lack of dialogue to keep me up to speed either… Final Fantasy: Crisis Core is literally smothered in CGI scenes and I swear that you could take half of them out, no one would notice and still no one would have a clue what should be going on. The fact these scenes are un-skippable makes you think that important information is coming up so you patiently watch and listen but are still left mystified and sometimes even annoyed. A good example is the three minute segue into why Angeal never stole ‘Dumbapples’ from his best mate which he ends with the fortune cookie line of ‘Every story is worth listening to’… Yeah ok, that maybe so but I beg to differ, using this very story as an example that they’re not. 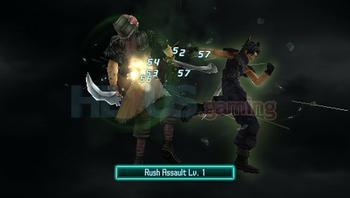 So the message here is that although the presentation is superbly polished it’s soon becomes somewhat tiresome to have to sit through a bunch of CGI snippets which have little relation to what you’re doing. That said, some of them are worth tolerating as they further the storyline but seeing as that’s more twisted and tangled than the average office telephone cord, you’ll still learn hardly anything from them.