Fan service galore but not much more...

So let’s look at the fights, which as always are the core of the Final Fantasy gameplay. If you were expecting turn based combat then you’ll be disappointed as Final Fantasy Crisis Core is real time battling all the way. You control Zack with the joystick or d-pad and run him at the enemy you want to take on, then hammer the life out of the X button to get him to attack. Should the fancy take you, a blocking move is available with the triangle button but pretty much all the time you can just take a bit of damage and carry on.

More often than not you’ll be fighting multiple enemies at once and this is where the real-time aspect of the combat, combined with being able to select your targets, comes in very handy. Most enemies will power-up an attack, creating a glow around them as they get ready. This gives you a second or two to attack them and interrupt the sequence, very handy later on with some of the tougher bad guys. 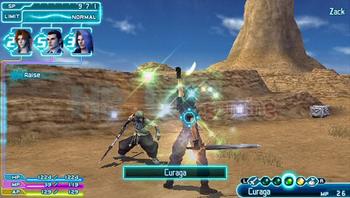 Zack himself has a range of attacks and spells he can use providing he has the necessary points and here is where Final Fantasy Crisis Core can be a pain in the bum. To select an attack you scroll along your pre-loaded skills list using the shoulder buttons then use X to deal out the punishment… which means on the harder difficulty you’re going to need some nimble fingers as you run around, block attacks and frantically scroll back and forth for attacks to use. And yes, you will make the supremely annoying mistake of thinking you hit the shoulder buttons to switch to sword attacks, run up to the enemy, press X to attack and then watch as Zack necks your last health potion because you were on the wrong slot…

Now thrown on top of this is the DMW (Digital Mind Wave) system, which is a way of (semi) randomly increasing Zack's stats and accessing special moves. It’s totally random and completely out of your control and drops into the play apparently whenever it fancies though that’s not actually the case. The DMW is like a fruit machine with three tumblers of character portraits that spin around and, depending how they land, you can then watch a mini-sequence as Zak executes a special move. 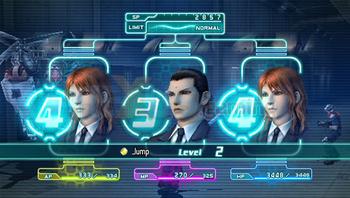 More importantly for the RPG side of things, there’s also 3 number tumblers in the DMW which are the only way to level Zack up. Now whilst that sounds completely random it isn’t as there’s obviously a hefty weighting coming in from Zack’s XP but it has to be said that having a semi-random upgrade moment can, for the more traditional RPG player, be somewhat off-putting.

The action itself is just what you’d expect from Final Fantasy, which is where I actually have the biggest issue. You see, much as I like the Final Fantasy series, I can’t help but think this is all a bit outdated now. We’re going over the same ground in a slightly different way but unlike the slew of shooters and racers and so on that swarm over every other genre, Final Fantasy Crisis Core has kept very much within its own world. So whilst fans will be getting all excited over snippets of story here and there that fill in gaps in the Final Fantasy lore, they’ll also be feeling that this is the swansong for the series… a bit like an aging actor who knows he’s got one last film in him and decides to go out with a semi-pastiche, semi-homage to his previous movies. 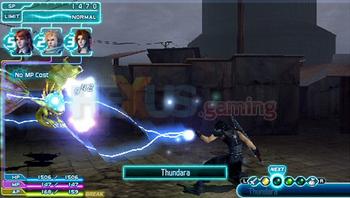 So this is one for die-hard Final Fantasy fans and maybe one for PSP owners who haven’t realised yet that Dungeon Siege is out on the same system. For everyone else, as much as we loved Final Fantasy, it’s about time it was shuffled off to the retirement home so we can remember the series in its brilliant past glories.

HEXUS World Leading HEXUS Right2Reply initiative invites manufacturers, their representatives and vendors which supply HEXUS with products for technical editorial evaluation, to comment on the articles that we publish. If they choose to respond, we publish their response verbatim.