What do we like?
There are many strategic layers to the monster hunting and part of the challenge in combat is adapting your skills to tackle the different creatures. You have to study behavioral patterns and take into account numerous factors, including the environment, when tackling monsters. It’s a challenging mechanic, but extremely rewarding when you get it right. You really need to knuckle down and learn to hunt well if you’re going to succeed. I’ve become totally immersed in the game because there’s no other way to play it.

In helps that there's a vast array of detailed monsters to tackle, all of which have their own behavioral patterns and react intelligently to your presence. With the excellent A.I. and animation of the beasts, plus the tactical combat that you need to employ to come out on top, the battles can be very exciting and it's extremely satisfying knowing that you've had to use your skill and hard work to win.

Aside from combat there's fun to be had out of visiting your farm regularly, earning money from the land and seeing it grow over time. It's an addictive,albeit repetitive, task that gives you some much needed respite from the intense bouts of combat. Combining objects that you gather from the farm or during your adventures and discovering what powerful items you can make is also a lot of fun. The more you experiment, the more rewards come your way.

The online gathering hall is really the place to be in Freedom Unite. Being able to meet up with up to four players and share the adventures together and work as a team to hunt down beasts and devise strategies is even more rewarding than playing alone; and it’s worth nothing that there are some missions when having a team-mate alongside you is essential.

Monster Hunter Freedom Unite offers incredible value for money with approximately 400 missions, 1500 weapons, 2000 armour sets and hundreds of items that help you in your adventures. There's so much to do, so much to experiment with and and so much to learn. Without a shadow of a doubt, it's one of the most immersive action-rpgs that I've ever played. 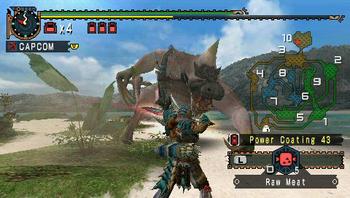 What don’t we like?
We’re very disappointed that we can’t just hop into a server and play Monster Hunter online. It does feature 4 player ad-hoc multiplayer, which has gone down a storm in Japan, but in Europe the likelihood of most gamers having four friends that all have PSPs and all have a copy of Freedom Unite are going to be slim indeed (although you could always head down to London's Gathering Hall.) Still, as mentioned in the last section, it’s a feature that works extremely well if you've got the friends.

For less hardened gamers, Freedom Unite may be a little overwhelming. There is a lot of information to digest, a hell of a lot to learn, and combat can be very difficult, even in the early stages. You can't just rush into a quest and rely on button mashing to win the day. If you don’t take the time to study the monsters and bring the right equipment with you on quests, you'll get slaughtered. Freedom Unite is a hardcore game for hardcore players with a pace that will only suit those in it for the long haul.

Despite the fact that you can install part of the game to the PSP’s memory stick, there are still quite a few loading times to sit through. As Freedom Unite is quite slow paced anyway and fighting against one monster can occasionally take an age, it can be frustrating waiting for the screen to load whenever you move to a new area.

Final Thoughts
You do need a lot of patience to play Monster Hunter Freedom Unite and therefore the gameplay is going to appeal to a very specific type of gamer, but if you’re willing to commit to the long haul, and can brave it past some tough spikes in difficulty, then you’ll be thouroughly rewarded with hundreds of hours of addictive gameplay.I've had so much fun playing Monster Hunter Freedom Unite that I'm buying my wife a PSP just so that I'll have someone around to regularly quest with. I can't give it a higher recommendation than that.