Zombies have never looked so good

As we didn’t review Valve’s apocalyptic first person shooter the first time around (shame on us) we thought that with the launch of the Left 4 Dead: Game Of The Year Edition due on May 15 2009 it’s as good a time as any to fill you in on why, if you haven’t played it already, this latest edition is well worth picking up.

What’s is all about?
Left 4 Dead is a first person survival horror game developed by Valve, the same team that brought us the Counter-Strike and Half-Life games. Though you can play the campaign alongside three A.I. teammates, it’s a game designed specifically for co-op play with up to four players (split-screen or online) taking on the role of survivors who find themselves in a post-apocalyptic world battling for survival against hordes of rabid zombies. There are four campaigns, each split into five sections and the objective is to move through each area slaughtering zombies and trying to keep your team-mates alive so you can all reach the extraction point in one piece. It’s about killing zombies and making sure you don’t get eaten alive - that’s all you really need to know.

Aside from the campaign, players can fight through the game in versus mode, where two teams of four alternate between Survivors and Infected. This latest edition adds two new campaigns to this mode, Death Toll and Dead Air and the brand new survival mode, which pits four players against waves of attacking zombies.

What we like about it?
Left 4 Dead is jam-packed full of heart-stopping moments. The unpredictable moments keep coming and coming ensuring that the tension is ramped right up all the way through to the chilling finale. The intense atmosphere created by a nice blend of spooky and horror clichéd locations, such as the abandoned subways and sewers, in addition to some inspired art direction add to the decayed look and the feeling of apprehension you get as you turn every corner or open every door. The A.I. “Director mechanic,” which takes into consideration the stress level of players by taking into account a number of factors, including your current status and skill level, works magnificently in sustaining the pressure that you feel in fighting for your life and as a result the game runs at just the right pace; tweaked expertly to suit the way you play. 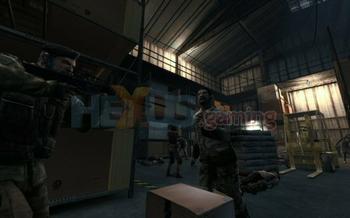