Like Rez, Child Of Eden is an on-rails shooter, but there’s a narrative attached to it too which immediately creates quite an impact before you even begin, with the beautiful image of space goddess Lumi immediately arousing interest - especially if you’re a hot-blooded male into videogame chicks (weirdos!). The concept revolves around trying to save Project Lumi, a mission to reproduce a human personality inside Eden, the archive of all human memories. As the project nears completion, the archive is invaded by an unknown virus. The player’s mission is to save Eden from the virus, restoring hope and peace.

The storyline paves the way for the 'Infected', a band of enemies consisting of various shapes and colours that occasionally resemble living organisms such as trilobytes, who try to stop your plight as you travel at speed through undulating space corridors and vortexes staving off their attacks. You do this in typical Kinect style by using your hands to move around the screen, making gestures to blow them to pieces with streams of lazers, while clapping your hands to change weapons and raising your arms to trigger “Euphoria” which clears the screen of foes instantly - offering you a swift escape from imminent attack when things get too intense. 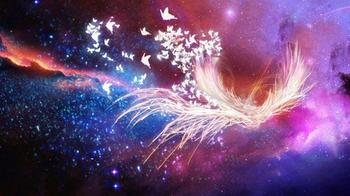 Gameplay is typical shoot ‘em up fare, but with the addition of Kinect it becomes quite an experience to immerse yourself in, one that surrounds you with sound and visuals and sucks you in by making you move and sway in time to the electriconic beats; whether you plan to or not. When you flick your hand to shoot an enemy, or swipe your hand across screen it’s accompanied by a range of delicate sounds that make you feel like you’re the conductor of an celestial orchestra. The geometric swirls seem to get more intense as you become ensnared in the ethereal blend of colour and hypnotic beats. And, as you reach the end of each level, there’s a satisfying crescendo of music accompanied by an explosion of divine artistry that ultimately provides you with a sense of achievement. Indeed, Child of Eden can be quite an uplifting experience.