But I have friends, who will talk to me!

You see, I have friends! In fact, I have a friends' list that is overflowing with like-minded players I've met over the years, who are of a similar age (late thirties) and who do want to play BF3 how it demands to be played. So, when it's possible, I meet up with a group of mates in Xbox Live Party Chat, where we choose a server and then jump into a game.

Immediately, the Battlefield 3 experience changes significantly. With four classes to choose from we can now formulate a proper plan and think about our roles in the game, choosing Assault, Engineer, Support or Recon - tactically playing to our individual strengths - while ensuring we have balance across the team and take into account the battlefield where we'll fight.

Now when I spawn, we're all in it together. One guy jumps into a tank, while an engineer runs by his side, planning to stay close by to help repair the vehicle if need be, and keeps an eye out for enemy vehicles that he can target with his rocket launcher - especially if an enemy vehicle starts firing at our tank. A sniper heads for higher ground where he/she can get an elevated view over the battlefield, informing us of any enemies heading our way and marking targets with their laser designator while keeping us safe with pin-point shots. 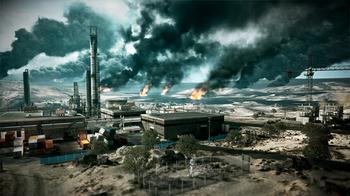 Meanwhile, two assault troops head off together on foot, hoping to mop-up ground troops in the thick of the battle and watch each other's backs, while two guys jump in a helicopter - one piloting and the other controlling the Gatling gun – survey the area from the skies. All of a sudden the Battlefield 3 experience feels real, and it feels epic. When played how it should be played, DICE's shooter captures the drama of war unlike any other game, and can leave you feeling quite breathless, worn-out, but totally buzzing from the intensity of the battle.

To achieve this sense of scale and immersion DICE has ensured that the whole BF3 production is top-notch. The developer has blended powerful audio work with visuals that have real impact, while creating guns that wield immense power and handle well, as well as great-looking battlefields devastated by the constant hammering of artillery and bombs.

Walls crumble, trees topple and everything shakes from the impact of explosions, creating a tremendous noise that, with 5.1 surround sound cranked up, has made me, on numerous times, duck down for cover just in case one of those RPGs happens to burst out of the screen and take my head clean-off.

Plumes of thick smoke fill the skies and the impact of seeing jets battling in the air, helicopters exploding from the weight of an RPG attack, and the continuous peppering of gun-fire from troops frantically fighting for survival, is quite a feast for the senses. 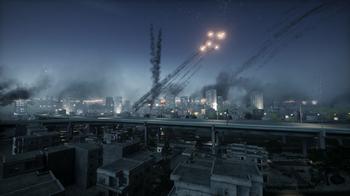 Hold on to your hats

If you're not used to playing first-person shooters, or indeed have never experienced the Battlefield series before, this third iteration can be quite overwhelming. There are no tutorials on how to fly an attack helicopter or a fighter jet - which are still as difficult to control as they were in Bad Company 2 - and there's no game manual to tell you about the strengths of the various classes or how to disarm M-Com stations with an EOD Bot. Also, if you've not been playing Battlefield 3 from day one, you also start at a disadvantage to the legions of gamers who have already reached the higher ranks and unlocked the best weapons and upgrades.

While you might wander around with a standard AK47M assault rifle, someone else will have a G3A3 equipped with a 'x4' scope and an infrared sight. This is one of the things that bugged me when I first started playing Battlefield 3, but it also motivated me to try and 'level-up' as quickly as possible and reap the same rewards. Like Bad Company 2, you gain points for everything in the game, from kills and assists to repairing vehicles and reviving team-mates. Points are split across the classes, so depending on which role you play determines which gadgets and upgrades you unlock.

You can switch classes whenever you die and choose different load-outs, so you can make the choice to evenly level-up across the classes or specialise in a particular area. Like many other gamers, I've spent the majority of BF3 in the first few days catching-up with those gamers who have a lot more time to invest. Like those selfish people that I've written about earlier in this review, I too became just as concerned with levelling-up and getting access to the best weapons and gadgets - by switching roles frequently and ensuring I commanded a range of vehicles. Indeed, it's quite easy to concentrate on this rewarding system than it is focusing fully on the greater good of the team and the task ahead.