You are here:
Software Features

When I was told that DivX wanted to meet up I must confess I hesitated. I mean - a codec. What could they possibly have to say that was of interest? Anyway, I reminded myself that it's not for me to prejudge and, with the assurance that red wine would be available, arranged to meet Malachi Bierstein (pictured) - EMEA GM of DivX.

Despite writing about technology for a living, I must confess almost complete indifference on the matter of codecs. Only when I can't play a file on a given device does it become an issue, but generally I take digital content for granted and certainly don't care how it's delivered.

Having made sure to secure my glass of red from Bierstein first, I said as much to him, and challenged him to tell me why I should care. Bierstein pointed me towards the box of the Samsung Galaxy Tab he had brought with him and alongside the Android, Bluetooth and Wi-Fi logos was that of DivX.

This, said Bierstein, is why I should care. Not so much that Samsung has licensed DivX, but that it saw fit to advertise the fact. Bierstein insisted that DivX had not paid Samsung to put its logo on the box. Quite the contrary, in fact, Samsung had to pay to become DivX certified to get that priviledge.

The reason for the logo on the box is consistent with DivX's overall business strategy - to become the ‘kite-mark' for video. In other words, for the DivX brand to become so synonymous with a consistent high quality of video that you wouldn't contemplate buying a device that didn't display its affiliation with the codec.

DivX prefers not to be referred to as merely a codec. "We're a digital media company," said Bierstein. "We're about connecting people and entertainment." The purpose of his press trip is to spread the word about DivX and stress the difference between a device that claims to be able to play back DivX and one that is DivX certified. 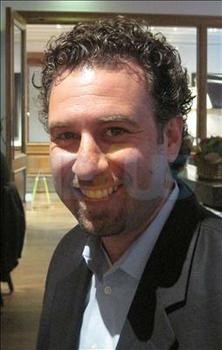