You are here:
Chassis Components News

Lian Li is at CeBIT showing off its popular Desk Chassis aluminium (what else?) PC case. The Taiwanese premium aluminium PC case maker says that it has taken in and considered feedback from attendees of the Hanover computer show to update and modify the DK01. Thus the one on show at CeBIT is slightly different to the one pictured below, which is to be released "soon".

Following the CeBIT feedback Lian Li tells us that it has made a number of changes to its DK01 Desk Chassis which it lists as follows:

2) Headphone rack with pocket on the side 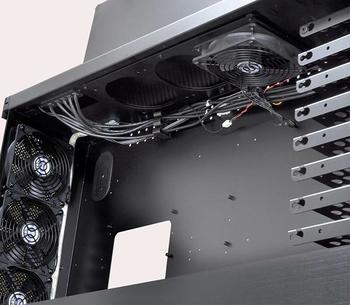 The chassis maker politely thanked everyone for their constructive feedback and said that the finalised version, as pictured and available in two widths, will be released soon. You can see from the spec, reproduced below, that except for the differing widths of the upcoming DK01s the rest of the spec remains the same. 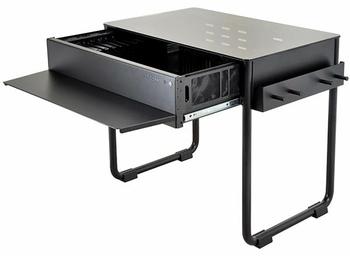 The 1200mm version, the widest of the two, isn't all that wide for a desk, it's quite a bit less wide than my cheap IKEA weetabix wood pulp desk. So while it might be well constructed and expensive it will still look a bit like a PC trolley style desk when positioned in a room. Also I'd like to see a crossbar style bit of leg reinforcement at the back if this is to support a weighty mix of PC components, a triple monitor setup and by elbow. However Lian Li says that it is "very sure," of its DK01's sturdiness – even with the hardware drawer removed.

Does the Lian Li DK01 tickle your fancy or you think that it would benefit from some further changes? Lian Li is still listening to comments on its Facebook post, so you can head over there to give the guys a design nudge. You won't find the price though as "We won't be setting a price until we have finalized the DK01," said the Lian Li team just a few hours ago.

Posted by Ginettor - Tue 11 Mar 2014 15:44
Dislike the idea of such a thick desk, seems to impact leg space quite a bit. Although saying that, it does seem rather compelling!
Posted by Odeas - Tue 11 Mar 2014 15:56
The top section looks fairly reasonable and I like the glass top and removable keyboard tray but those legs make it look incredibly cheap,tacky and fragile,looks like something you'd find in a school. Also the ‘Headphone Rack’ looks like a coat hangar's been stuck on the side. I'd of also liked to have seen some better cable management for the legs as its such an open design.

Don't think I'd feel very safe putting a high end PC in there and I can also see this being rather expensive. Just hope you never trip over a cable as you'll bring the whole thing down and kill the lot!
Posted by YoloSwag - Tue 11 Mar 2014 16:08
This definitely, looks good.
I was considering such a build, but I was thinking of crafting it myself to be more specific.

However, if this doesn't cost as much as a mid-range card, I might consider buying this instead.
But that crafting thing, I would really much like to experience that sort of thing. I could even put in my own ideas…
Posted by LeetyMcLeet - Tue 11 Mar 2014 16:42
My heart is saying yes, but my brain says no lol
Posted by DemonHighwayman - Tue 11 Mar 2014 17:36
It certainly looks better than the previous version they were showing ! although it still seems to be on the small side.