After a busy November and December in the desktop CPU and GPU space, AMD starts off 2021 with renewed focus on mobile processors.

The virtual CES 2021 is the backdrop for announcing the AMD Ryzen 5000 Series mobile chips codenamed Cezanne.

The 13-chip stack is split into two established camps. Five models are designated U-Series, meaning they're designed for thin-and-light laptops which usually accommodate 15W TDP chips. The further eight are from the performance H-series family (35W+), primed for high-performance gaming and content creator laptops that usually ship with a discrete graphics card. 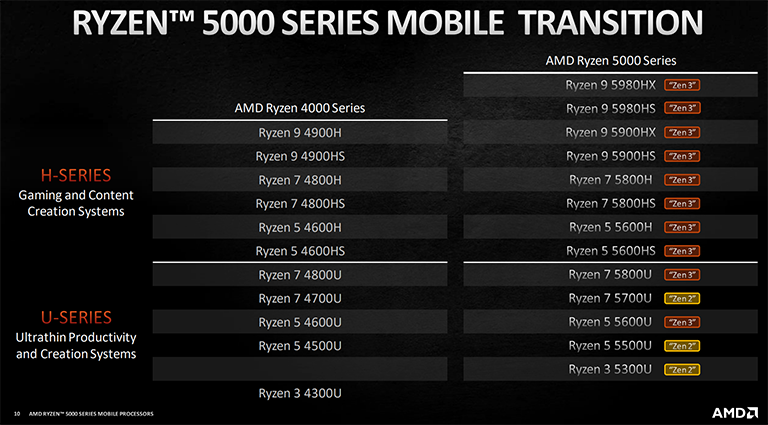 A handy comparison slide spells out how AMD sees the incumbent 4000 Mobile Series give way to the new, improved 5000 Mobile. Before we get into the nitty-gritty of what is new under the hood, it's worth understanding that three of the 13 new chips continue to be based on the existing Zen 2 CPU architecture. AMD's reasoning rests with certain markets requiring the easiest possible transition from one family to the next. 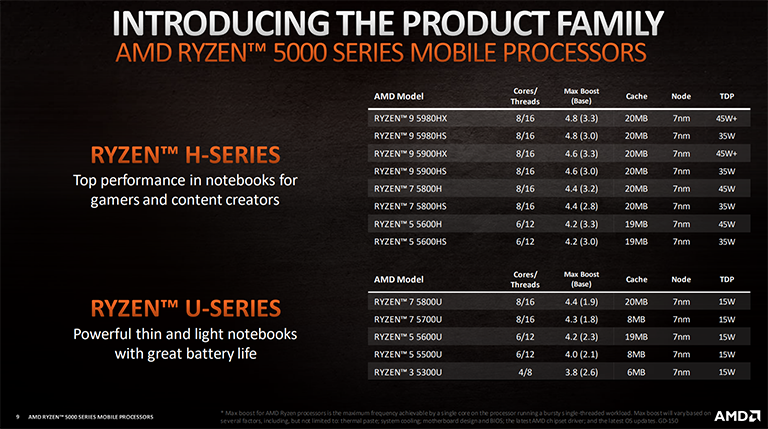 So what are the differences, you may ask? The main one is that the majority of chips - 10 out of 13 - use the latest Zen 3 architecture, which you can read all about here. In a nutshell, it provides an average 19 per cent IPC uplift over Zen 2 at the same frequency. These Zen 3 parts have double the L3 cache compared to their direct predecessors. Like their desktop counterparts, improved yields and processes lend themselves to higher frequencies on top of that IPC uplift, and always-on Collaborative Processor Performance Control (CPPC) technology keeps speeds high.

The majority of the performance uplift is on the CPU side, clearly, as AMD continues to use the older Vega architecture for the baked-in graphics. It's surprising not to see RDNA2 make an appearance in mobile when rival Intel has focussed on significantly improving its graphics capability. Countering inferences on a lack of innovation, Lisa Su mentioned that RDNA2 graphics will be coming to laptops this year.

Drilling down, the premier U-Series 15W chip is the Ryzen 7 5800U. Understanding the combination of higher IPC and CPU core frequency means it will be 10-20 per cent faster than last year's Ryzen 7 4800U. AMD provided a couple of slides pertaining to productivity and professional-class performance. The increase isn't as spectacular as the last jump because AMD keeps to the same maximum 8C16T processing. Rather more importantly, AMD reckons its top 15W solution is better at productivity than Intel's Tiger Lake Core i7-1165G7. It should be, too, as it has double the cores and threads. Battery life increases by an hour or two, as well. Interestingly, AMD doesn't share any purported IGP gaming benchmarks. 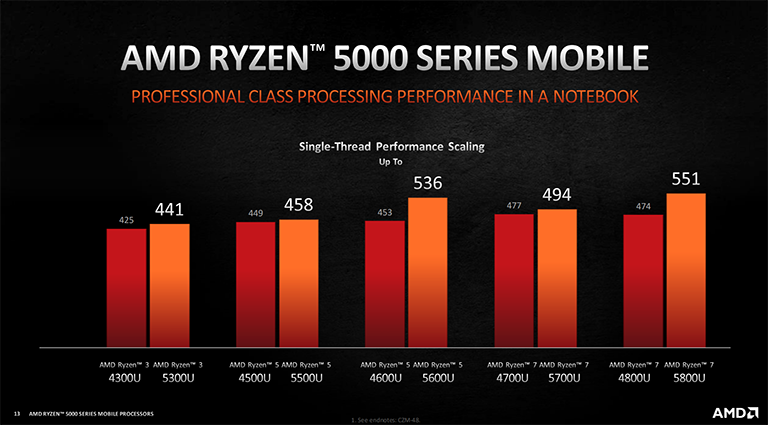 Other U-Series chips replicate the CPU-side improvement, and it's good to see SMT everywhere. Think of them as incremental improvements over last year's offerings. Laptop OEM partners will naturally switch out to Ryzen 5000 Mobile with the minimum of fuss.

AMD previously used the HS branding for high-performance mobile processors considered best in class. Ryzen 5000 Mobile duly has a couple of those models, but the top dogs now, primed for no-compromise laptops, are the new HX. Multiplier unlocked for maximum OEM implementation flexibility, this HX category sets a new bar for performance. 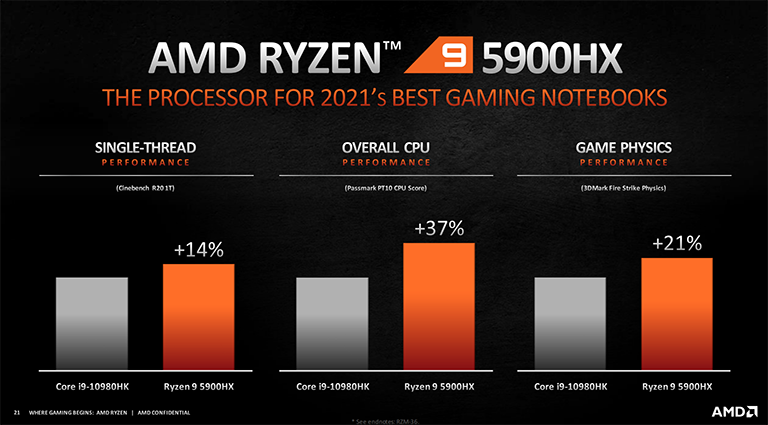 The Ryzen 9 5980HX and 5900HX will go head to head against the best Intel 11th Gen Tiger Lake chips for inclusion in the premier gaming laptops of 2021.

As a wrap, AMD's mobile processor portfolio is expanded by a slew of processors mainly based on Zen 3 CPU technology. Offering a number of options for ultraportable and high-performance laptops in 2021, expect up to 20 per cent more CPU oomph than last year's premier solutions. It's rather disappointing AMD hasn't integrated the latest RDNA2 architecture for the graphics portion, particularly for thin-and-light laptops with no space for discrete cards, so a mid-year refresh may well be on the cards.

Looking for a new laptop in 2021? The choice between Intel Tiger Lake and AMD Cezanne becomes more interesting than ever. Add to that the complete disruption caused by Apple's electric M1 processor and we have the makings of some serious competition. The winner is you, the consumer, as all three companies have compelling technology.

As enthusiasts and coming off the announcements at CES, which would you choose? Intel, AMD, or, dare we say, Apple in the mobile space? Let us know your thoughts in the forums.

Now we just need some availability…
Posted by lumireleon - Wed 13 Jan 2021 07:50
…It's rather disappointing AMD hasn't integrated the latest RDNA2 architecture for the graphics portion, particularly for thin-and-light laptops with no space for discrete cards…
Posted by kompukare - Wed 13 Jan 2021 08:48

lumireleon
…It's rather disappointing AMD hasn't integrated the latest RDNA2 architecture for the graphics portion, particularly for thin-and-light laptops with no space for discrete cards…

It certainly is taking a long time to get RDNA into APUs.
Strangely enough, the next Samsung Exynos will have RDNA when comes out at the end of 2021 or so.
However, if die space efficiency is the reason then I'd rather have the 16MB L3 with Vega than 8MB with RNDA.
Of course, 16MB is still only half of what a full CCX of Zen3 has, so desktop 5800X has 32MB while mobile 5800H 16MB.
Will be interesting to see benchmark whenever those APUs finally make it to desktop.
Posted by deksman2 - Wed 13 Jan 2021 23:27

LSG501
hmm…. anyone want to do the maths because I've got this feeling that Intel is no better than equal to AMD again…

Actually, AMD readily BEATS Intel in single and multi-core tasks, not to mention it has far superior efficiency.
AMD's Zen 3 IPC is much higher than Intel's… Rocket Lake's IPC is virtually unchanged from Tiger Lake's (the only difference is that Intel optimized its node to such a degree where they can clock their CPU's higher than AMD, and this has paid off in case of Rocket Lake 4c/8th mobile CPU when it came to overall performance, but when scaling up to 8c/16th, Intel will have to drop their frequencies and reduce the capabilities of their iGP. Why?
Because with more cores comes greater power consumption, and more space on the die is occupied by CPU cores (therefore, the iGP cores will need to be dropped, and/or the frequency will need to drop).

Now we just need some availability…

Yes, but the availability lies in the capabilities on the fabs… or in AMD's case, TSMC… and for Intel, their own fabs.
Both have been surpassed by demand to be fair, and TMSC especially is in high demand catering to several clients (not just AMD)… so when you think about it, the fact Intel was unable to bring its fabs up to scratch yet speaks they're in the deep end of it.

Also, it was recently mentioned that AMD's stock availability should improve soon.
Posted by moizhaq99 - Thu 14 Jan 2021 01:44
These will be hot in a laptop