Nvidia's GeForce GTX 1050, 1050 Ti graphics cards have been popular additions to many a new laptop shown off at the recent CES 2017. These GPUs are also a good choice for those who want to build smaller, lower powered PC systems that can make a good fist of modern 1080p gaming. In November MSI was the first to create SKUs with such SFF and HTPC builds in mind as it launched the MSI GeForce GTX 1050 2GT LP and MSI GeForce GTX 1050 Ti 4GT LP.

Now Gigabyte has created its own GeForce GTX 1050, 1050 Ti 'LP' models, the Gigabyte GeForce GTX 1050 OC Low Profile 2G and GTX 1050 Ti OC Low Profile 4G. As you can see Gigabyte's models follow a similar pattern laid out by MSI but with an additional sprinkling of 'OC' magic. The Gigabyte models are faster than their MSI (reference clocked) rivals in standard 'Gaming' modes and pull away even further in 'OC' modes. I've summed that data up in the bullet points below: 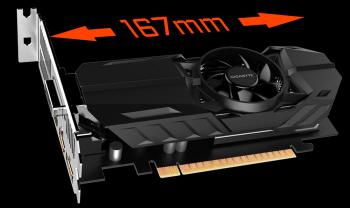 We don’t have pricing or availability for the new LP cards from Gigabyte but these compact examples usually cost a little more than a standard model.

In other Gigabyte graphics news, Aorus, the premium gaming brand was showcasing its first graphics cards at CES 2017. The Aorus GTX 1080 featured a similar triple 100mm fan cooler to the Gigabyte GTX 1080 Xtreme Gaming 8G. A backlit Aorus logo on the side and a backlit Eagle on the backplate complemented the x patterned LED lighting effects. 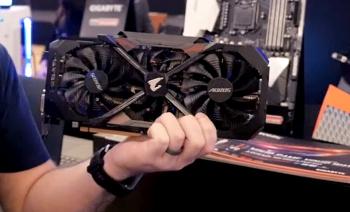 PCPer reports an "interesting twist" in the Aorus graphics card's design, as it offers two HDMI ports on the back of the card, to tidily facilitate front panel HDMI outputs for things like VR headsets. The first Aorus graphics cards are expected to become available in Feb.