A week ago HEXUS reported upon some leaked benchmark results which gave some indication of the likely performance of Intel's upcoming DG2 graphics cards based upon the Xe-HPG GPU. Last week's info regarded a GPU with 448EUs – and it went shoulder-to-shoulder with the likes of the AMD Radeon RX 6700 XT and Nvidia GeForce RTX 3070 according to those figures.

Just ahead of the weekend, some other Twitter-based benchmark data miners unearthed evidence of some smaller GPUs on their way to the DG2 stables. Leakbench found what is likely to be a discrete GPU of some kind with 256EUs, a top frequency of 1.4GHz, accompanied by 6.22GB of VRAM. Benchleaks made note of what is likely to be an integrated GPU with 96EUs at a maximum of 1.2GHz, alongside 1.5GB of VRAM. Both results featured Intel Alder Lake CPUs, and the graphics were based upon the 'Gen12 GPU' architecture from Intel, according to the benchmarking tool reports. Sadly, both sets of results have now been taken down, but the likes of Tom's Hardware and VideoCardz have captured the Geekbench data for posterity. 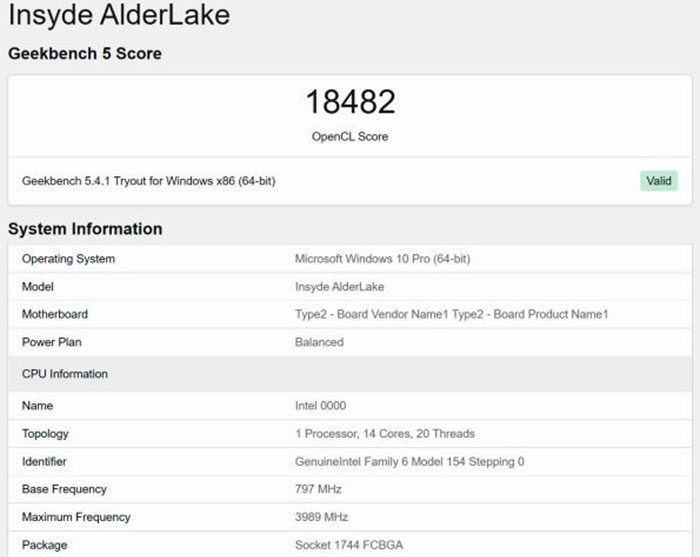 Indications are that the GPU with 256EUs is based upon a cut down DG2-384 GPU, and that it was installed in a laptop because the accompanying CPU was installed in a 'FCBGA 1744' socket. Performance wasn't great in this instance, with the Geekbench score of this 256EU GPU recorded as 18450 points – on a par with a GeForce GTX 1050 graphics card. Of course the 96EU GPU with slower clocks and less VRAM did even worse, with scores on a par with something like the GeForce GTX 460.

Last week's leaks from Tum Apisak had pitched an Intel DG2-128EU GPU as being faster than the GeForce GTX 1650, so the latest results from what appear to be mobile / integrated implementations are quite disappointing. However, the indication that these latest scores do come from early, power-restrained, laptop implementations should help enthusiasts and gamers stay positive about the upcoming Intel raid into mainstream desktop PC gaming GPU territory.