Intel is at the 2021 International Supercomputing Conference (ISC), showcasing its high performance computing (HPC) wares. Official highlights of its keynote include info about 3rd Gen Intel Xeon Scalable processors in supercomputers, next gen 'Sapphire Rapids' Xeons coming with HBM on-board, High Performance Networking (HPN) with Ethernet, and a sprinkling of news regarding the development progress of Intel Xe GPUs – which is the focus of the article below. Separately, via social media, Intel has teased an Xe-HPG (gaming) announcement soon.

The Intel Graphics segment of the ISC showcase was mostly concerned with the Xe-HPC GPU (Ponte Vecchio), as befits the audience of that show. The latest news regarding this data-centre and AI processing targeted GPU is that the first Xe-HPC GPUs have been powered on, and they are now in the process of system validation with several partners. 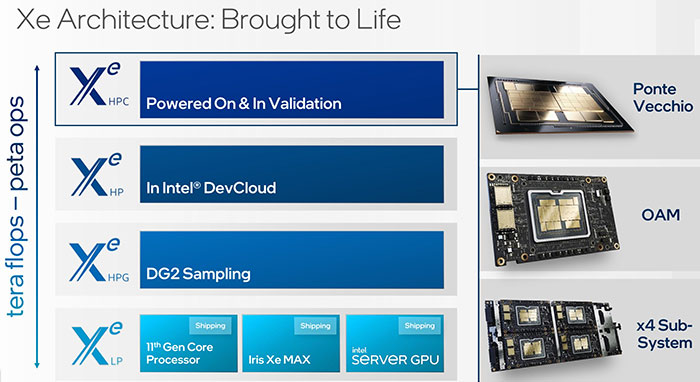 Intel described how Xe-HPC leverages its Foveros 3D packaging technology to integrate multiple IPs in-package, including HBM memory and more. We were reminded that Ponte Vecchio is going to be a major processing resource as part of the Aurora supercomputer at the Argonne National Laboratory. Meanwhile, Intel Xe-HP GPUs are now available to test via Intel DevCloud.

Moving along, most HEXUS readers will be more interested in the enthusiast / gamer segment targeting Intel Xe-HPG. According to a slide shared at ISC, these products are now sampling – so they are in the hands of manufacturing partners, and will be being tested in various configurations. Perhaps that is why we have recently seen some Geekbench and similar benchmarks recorded on online databases. 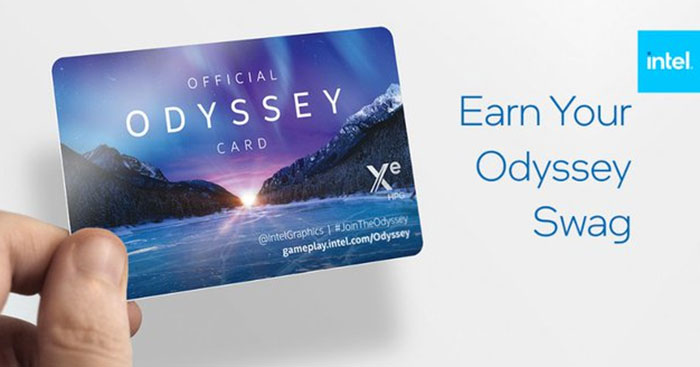 According to the link from Intel's social media post (first paragraph), Intel is continuing its Odyssey soon. The full teasing quote is as follows: "We are soon heading toward a milestone moment, the pending release of the Xe-HPG microarchitecture from Intel. Some of you received an Odyssey card and were the first to engage with Intel on this journey. Now is the time to redeem this card, which is one in many steps we hope to formally take forward with you."

Posted by Tabbykatze - Tue 29 Jun 2021 12:37
Odyssey makes its return after Raja had his choke chain pulled for pushing too hard too quick on the marketing.
Copyright © 1998 - 2022, HEXUS.net. All rights reserved. HEXUS® is a registered trademark of HEXUS.