AMD has written to HEXUS about the progress it has achieved in working towards its 25x20 efficiency goal, which it publically set back in June 2014. Revisiting the original claim, the '25x20' goal is an abbreviation of the target set out to achieve a 25 fold increase in the efficiency of AMD APUs by 2020. So, has AMD matched its target? No, it claims to have exceeded its target, and the latest 3rd Gen Ryzen processors with Radeon Vega Graphics ('Renoir' 2020), are said to be 31.7x more efficient.

Back in 2014 HEXUS readers were not wholly impressed by AMD's goal, typically complaining that it was a vague target. If a goal isn't clearly defined, I guess it is easier to fudge later on… Nevertheless, AMD explains its 'over-achievement' by saying it has been working on "relentlessly improving the 'performance per watt' of our processors," to help end users with performance and power consumption.

AMD says its latest and greatest APUs typically, based on Energy Star typical use energy consumption (TEC), use 84 per cent less power than their 2014 ancestors. It goes on to explain its reckoning as follows: "The normalized performance increase, based on a 50:50 weighted metric for Cinebench R15 and 3DMark11, is 5x higher from AMD's 2014 notebook processor compared to the 2020 design. This equates to 80 per cent less average compute time for a given task. AMD achieved a 31.7x increase in typical use energy efficiency from 2014-2020."

These savings can be highly beneficial to customers, and for enterprises even more so. Over a three year service life an enterprise servicing 50,000 AMD laptops from 2014 and 2020, the following savings could be made, asserts AMD: 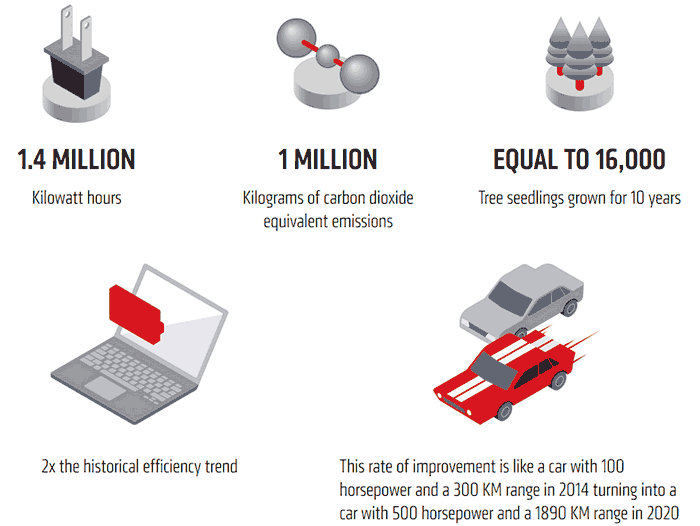 In a blog post today, AMD's Mark Papermaster admits that 'victory' hasn't been certain over the last six years. He says that headway was made mainly thanks to "some critical strategic calls, among them being the investment in the 'Zen' architecture, Infinity Fabric, and 7nm process technology." The heavy lift of besting the 25x20 goal also involved innovations in real-time power management, tighter CPU/GPU architecture integration, and multiple silicon-level power optimisations, explained AMD's Chief Technology Officer and VP of Technology and Engineering.

Going forward, AMD will continue to "strive for ultimate energy efficiency," and has some exciting products to come, teased Papermaster. Indeed many HEXUS staff and readers are eagerly waiting for official news on the next CPU and GPU improvements and innovations from AMD, namely Zen 3 and RDNA 2.

Cortex-M0-based SoC, runs at just 29kHz, but may unlock "the full potential of the IoT".

39 QOTW: Are you setup to continue working from home?

Or is the call to return to the office growing louder?

Posted by philehidiot - Sat 27 Jun 2020 14:17
I know they chose the easiest baseline but, this is still impressive work.