AMD has just published its Q3 2021 financial results. It has achieved record sales, again, and raised full-year guidance, again, for the third time this year. Importantly for investors, AMD beat analyst expectations, and shared a confident strong forecast for Q4. However, great news seems to have been priced-in, as the share price didn't really react in after-hours trading. 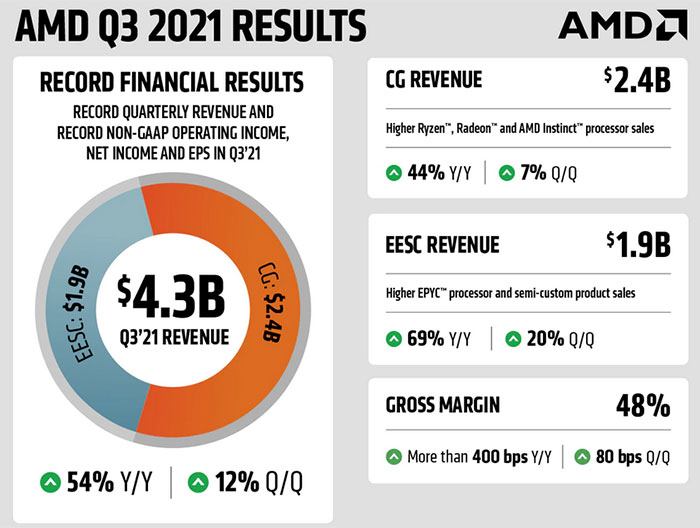 Key financials are encapsulated by AMD's natty infographic, shared above. Underlying these results, CNBC commented that revenue was expected by analysts to hit $4.12bn, but was actually $4.31bn (up 54 per cent YoY). Meanwhile, earnings per share were $0.73, vs an expected $0.67, which is up 16 per cent YoY.

"AMD had another record quarter as revenue grew 54 per cent and operating income doubled year-over-year," said AMD CEO Lisa Su in a statement accompanying the results. "Third Gen Epyc processor shipments ramped significantly in the quarter as our data centre sales more than doubled year-over-year. Our business significantly accelerated in 2021, growing faster than the market based on our leadership products and consistent execution." 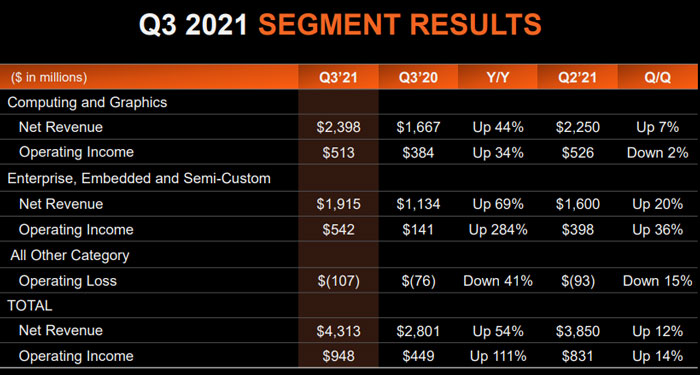 AMD's EE&SC segment covers its Epyc server ships, Instinct graphics accelerators, and the custom APUs that are used by the likes of the consoles from Microsoft, Sony, and Valve. Consumers are well aware of how fast the likes of the Xbox Series X/S and PlayStation 5 consoles fly off shelves. In the land of servers, Dr Su commented that AMD's data centre sales doubled in the last year, and she was particularly pleased with the "momentum" seen.

The CEO also said that AMD's purchase of Xilinx was making good progress, with the acquisition expected to complete before the end of the year.

Microsoft published its latest set of financials after the bell on Tuesday, too. It happily beat analyst expectations with revenue growth of 22 per cent YoY. While its cloud business flourished, Microsoft's Surface and Windows OS sales were impacted by hardware supply constraints. 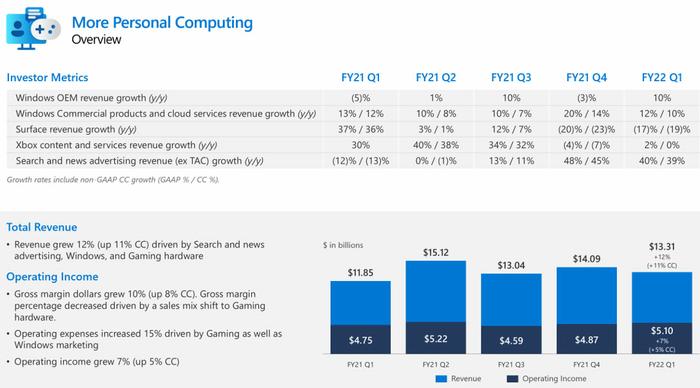 If you are interested in more details, please check out Microsoft's official earnings press release, and/or check out a third-party overview and commentary from CNBC.

18 Intel Arc Alchemist graphics cards may be pricier than expected

And the 'Intel 4' Meteor Lake compute tile has been successfully powered on.

CAT-THE-FIFTH
It makes you wonder how much they would have made if they had more supply!

And from those that have held off from building a pc due to gpu shortages (and their stupid prices)…. I would have bought AMD (still will based on what I'm seeing form Intel) earlier this year but I want to build a complete system and it's now at the point where I might as well wait for ‘new’ cpu's with ddr5 etc.
Posted by QuorTek - Wed 27 Oct 2021 15:10
Just gonna wait untill we got PCIE 5.0 and DDR5 for both GPU/CPU/RAM maybe SSD as well.
Posted by mercyground - Wed 27 Oct 2021 18:22
Kinda a blood bath for Intel in the server market now. The market is over its nerves on Epyc chips. The 1st Gens sold in dribs and drabs. 2nd Gens started the ball rolling and now the 3rd Gens are pretty much carving up the market. Intels Xeons are no match and the prices can only be cut so far. Even on Ebay the market for 2nd hand Xeon kit is falling.

Just makes me wish i'd bought AMD shares a while back when they were cheap as chips.
Copyright © 1998 - 2023, HEXUS.net. All rights reserved. HEXUS® is a registered trademark of HEXUS.