You are here:
Laptop PC News

Asus ROG has just wrapped up its keynote presentation at Computex 2017. Probably the star of the show was a new gaming laptop which ties in with an earlier announcement made by Nvidia today, regarding its holistic Max-Q design optimisations. The new 15.6-inch Asus ROG Zephyrus GX501 is said to "define ultra-slim gaming". It measures just 17.98mm thick, weighs 2.24Kg, but it packs in powerful hardware including up to an Intel Core i7-7700HQ processor, and the Nvidia GeForce GTX 1080 graphics processor. 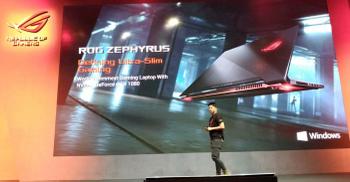 In its blog Asus strangely neglects to credit Nvidia and its Max-Q design, rather it attributes the "thinnest ROG gaming laptop we've ever made," design largely to its own Active Aerodynamic System (AAS) for cooling. In such slim and compact form factors cooling has to be carefully considered to minimise the possibility of thermal throttling. As well as various air intakes and vents, Asus has slimmed down fans, implemented new alloys, and equipped dedicated blowers, radiators and heatpipes for both CPU and GPU. A further pair of heatpipes draws heat from the system power circuitry. Fans are smart controlled for minimum acoustic disturbance. 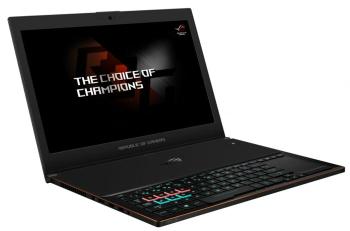 This is a 15.6-inch gaming laptop and the monitor panel used is Nvidia G-Sync compatible. Asus has chosen a vivid wide viewing angle IPS panel with refresh rates up to 120Hz. The panel provides Full HD 1920 x 1080 pixels, and has an anti-glare coating.

An Aura RGB keyboard with 1.4mm key travel and 30-key rollover is equipped with a wide range of colours and effects, plus separate QWER and WASD lighting zones for MOBAs and FPS games. Interestingly the side positioned trackpad lights up via hotkey to transform into an illuminated numpad. 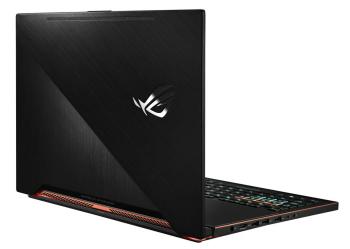 Supporting the potent mobile CPU and GPUs equipped, the Asus ROG Zephyrus can be configured with up to 24GB of RAM, and speedy NVMe SSDs up to 1TB. It comes with plenty of connectivity such as a USB Type-C port with Thunderbolt 3 for connecting DisplayPort monitors, for example, plus a HDMI 2.0 port, four Type-A USB 3.1 Gen 1 ports, a headphone/mic combo jack, and an SD card slot. Asus has equipped a built-in HD camera and array mic. Networking is catered for by the 802.11ac Wi-Fi and Bluetooth is built-in too.

Asus hasn't provided pricing and availability information as yet.

And it is still showing off its foldable ThinkPad X1 and Motorola Razr smartphones.

Posted by naturbo2000 - Tue 30 May 2017 18:24
I'm probably ok with putting the keyboard front-loaded like that, but give me a trackpoint or similar with edge-mounted buttons.
Posted by Ngt - Tue 30 May 2017 20:47
I'm curious to see how that feels to type on. It looks like it'll be weird at first but better in the long run.
Posted by Xlucine - Wed 31 May 2017 12:54
So the max-Q innovation is just avoiding the conflict between cooling system thickness and keyboard thickness? It's a neat bit of packaging, I'll give them that
Copyright © 1998 - 2020, HEXUS.net. All rights reserved. HEXUS® is a registered trademark of HEXUS.