Intel has announced a new computer design initiative. The chipmaker is opening three facilities worldwide to support the creation of Intel Project Athena laptops by various hardware partners. Labs will be opening up in key locations including Taipei, Shanghai and Folsom, California. The goal is that in 2020 Intel will have a bevy of partners ready to supply Project Athena laptops which offer qualities such as; 5G connectivity, AI smarts, 20hr battery life, instant resume from sleep, and more. 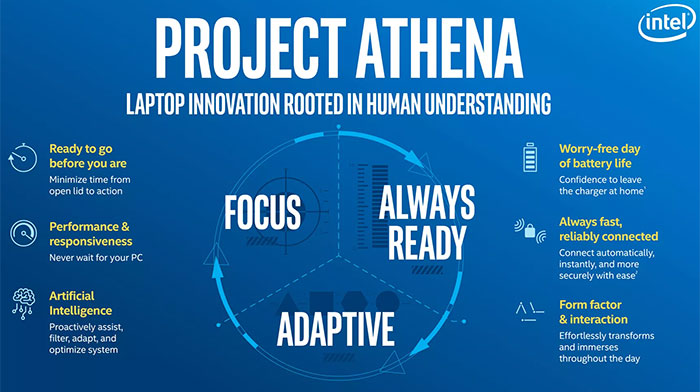 Project Atherna was originally announced back at CES 2019 and it is, as evidenced by its main thrusts, an Intel attempt to fend off Qualcomm powered PC design growth. Thus is it focussed upon performance and low-power optimization of vendor components for laptops. The new Project Athena labs will open from June. It appears that Intel has readied a design flow chart for OEMs, which of course will recommend the use of a wide range of its own components. 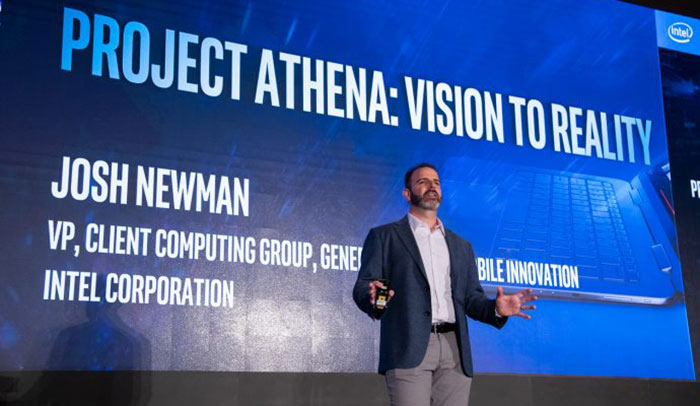 "Across the industry, we each play an important role in delivering the advanced laptops of today and the future. Project Athena Open Labs are a critical step in enabling more extensive, day-to-day collaboration with the components ecosystem to continuously raise the bar for innovation across the platform." – Josh Newman, Intel vice president and general manager of PC Innovation Segments, Client Computing Group.

Middle, you can see a picture of Josh Newman speaking to more than 500 members of the PC manufacturing ecosystem, gathered in Taiwan for the Project Athena Ecosystem Symposium. The Intel blog says that the first wave of Project Athena designs will be on shelves as soon as H2 this year but the main push will be from 2020 when Intel works more closely with independent hardware vendors (IHVs) to integrate their parts into Project Athena laptops. Thus it sounds like the first machines will be based off Intel reference designs, followed up next year with more tailored solutions - assembled from a wider range of approved and optimised components.

Posted by atemporal - Wed 08 May 2019 11:21
Any requirements to improve cooling and avoid throttling? No didn't see those mentioned. We'll just keep ignoring the elephant in the room then. And no-one mention 10nm either…

I would have thought the whole “waiting for your PC” thing was mainly due to throttling lag. It is on mine!
Posted by excalibur1814 - Wed 08 May 2019 11:38
Gaming machines really should do something about the great, big, silly hair dryer noise. Absolute madness. “Oh zurrrkkk my gamin' rig is 7mm thin!”
Posted by philehidiot - Thu 09 May 2019 19:58
So, taking cues from the Ultrabook thing…

They are creating a new notebook class and if you want in then you have to join the Intel club. You can try and create one on your own but you're going to fail as Intel will have tapped the best vendors. Each vendor on their own is powerless and beholden to Intel who will demand only their CPUs can go into the product, obviously and also probably ensure prices and margins are nice and low. Thus Intel will use their market punch to lock everyone who wants to make a successful ultraportable into building them with only Intel CPUs, effectively locking AMD out of the competition as all the suppliers have agreed to work with Intel.

philehidiot
That feels like a messy way of describing what's in my head - is it about right?

You missed out the bit where if you make products containing AMD chips then they cut your supply of Intel chips to make sure any increase in market share you could get from them you lose from not being able to sell Intel devices to those that want them whilst also removing any marketing budget kickbacks.

DanceswithUnix
You missed out the bit where if you make products containing AMD chips then they cut your supply of Intel chips to make sure any increase in market share you could get from them you lose from not being able to sell Intel devices to those that want them whilst also removing any marketing budget kickbacks.

Sounds all Nvidia GPP to me.