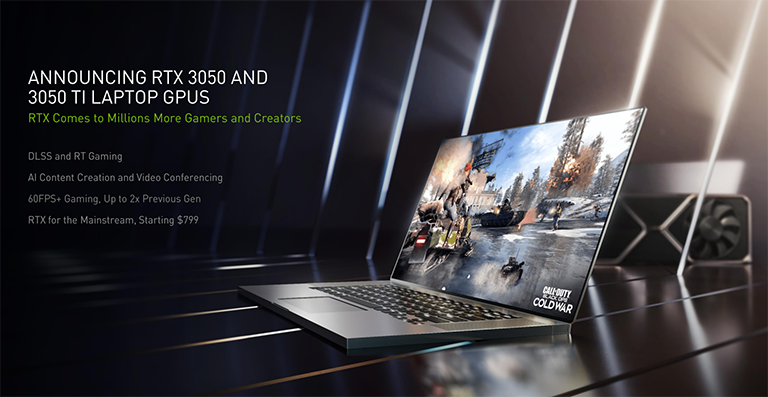 Nvidia is the undisputed leader for discrete GPUs for gaming laptops. The latest performance batch come from the RTX 30-series Ampere architecture. In keeping with recent launches, the green team goes performance-first, and we took a good look at the RTX 3080 in a recent review.

Distilling the gaming mana down further, RTX 3070 and RTX 3060 have come into the fold. Aiming to hit a lower price and increase the total addressable market opportunity, today Nvidia is announcing the Ampere-based GeForce RTX 3050 and 3050 Ti. 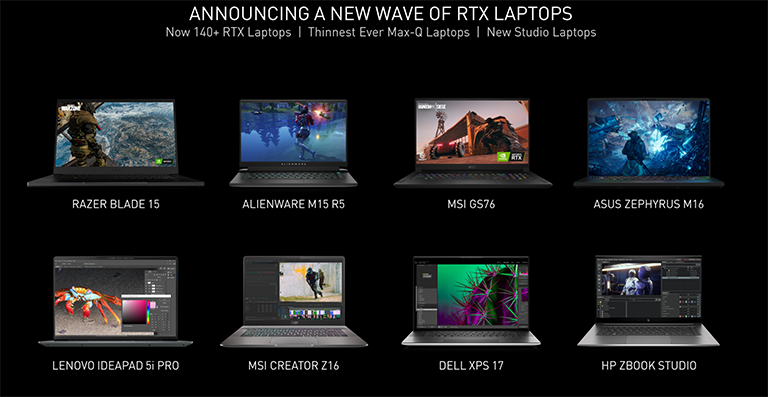 Nvidia expects these laptops to start at $799 and designs the chips so that manufacturers can build sleek models that fall into the thin-and-light category. Weighing less than 2kg and thinner than 20mm thick, the premise is to offer substantially more performance than even the latest integrated graphics. Nvidia reckons 1080p is possible and is at pains to push the RTX and DLSS capability that rival AMD does not yet have in the laptop space. In fact, the marketing is skewed towards RTX and DLSS working in tandem.

To that end, Nvidia puts forward benchmarks from five popular titles that have either RT or DLSS support, or both. The above slide is somewhat misleading because it compares against a last-generation GTX 1650 Ti that cannot do ray tracing, hence scoring nothing on the three right-hand titles.

Even without RT, Nvidia reckons the RTX 3050 Ti is about 50 per cent faster on a rasterisation-only basis if we look at titles such as Call of Duty: Warzone or Outriders. Is that enough from one generation to the next? We'd say yes if the average framerate climbs to 60fps at FHD. 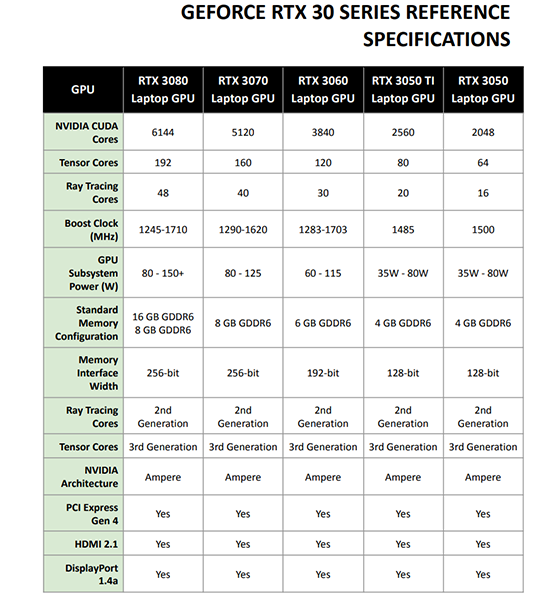 More concerning to us is the wider range of power budgets for these two new chips. Like their bigger brothers, RTX 3050 and Ti have a wide range of TGPs that effectively predicate performance. Nvidia says it does this to help partners integrate the GPUs into the widest range of chassis.

For example, a thin-and-light can have an RTX 3050 Ti with a 35W TGP. How will that perform against one in a larger, thicker machine able to handle the top-bin 80W chip? From previous experience, we'd say the performance could be up to 40 per cent different. Nvidia will counter with the knowledge that each has the same number of GPU, Tensor and RT cores, so it's not pulling a fast one.

If you play games that take advantage of Nvidia's DLSS and RT technology, then the RTX 3050 and 3050 Ti offer a significant step-change in performance from the previous generation, which is enough to provide smooth visuals at a FHD resolution.

The bottom line is that you will only know the true performance from in-depth reviews, but a simple rule of thumb indicates the thinnest of laptops will have less GPU grunt. Even these will remain fundamentally faster than IGP-only solutions.

We'll let you know just how RTX 3050/Ti laptops perform once the review machines begin to trickle in. Stay tuned.