It looks like Samsung is readying a laptop / tablet hybrid which is based around the kind of screen technology it is beginning to popularise with its Galaxy Z Fold and Z Flip smartphones. This prediction seems reasonable, as one of the most established (Samsung) smart device leakers on Twitter, Ice Universe, has shared what looks like an official logo for a Samsung Galaxy Book Fold 17 laptop.

Above you can see the logo, which looks like nothing special but is definitely in the Samsung Galaxy house style, and thanks to the reputation of the leaker it is very unlikely to be a made-up cobbled together thing. The logo isn't such compelling viewing, but put in the context of Samsung's Better life through Samsung OLED SID 2021 presentation video, it doesn't seem to be such a leap of faith to believe this folding screen laptop product is going to be realized in the not-too-distant future.

In the above video, which HEXUS originally reported on back when it was published in mid-May this year, you get to see various use cases of a handy "17-inch Foldable Laptop", among other things. At that time, we heard that the sample in the video had a 4:3 aspect ratio foldable screen. By my calculations, folding such a screen would result in two distinct display areas, each with a diagonal of about 12.5-inches (FYI I didn't use 'maths', just and old version of Adobe Illustrator). 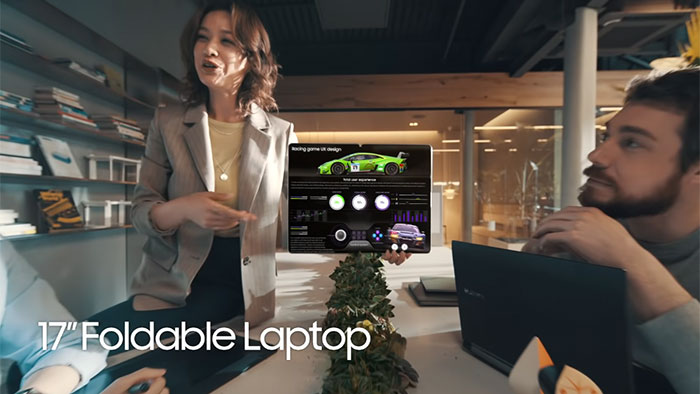 It is hard to know about any other features of this possible consumer product; processor (x86 or Arm) and OS (Windows or ChromeOS) remains a mystery for now. 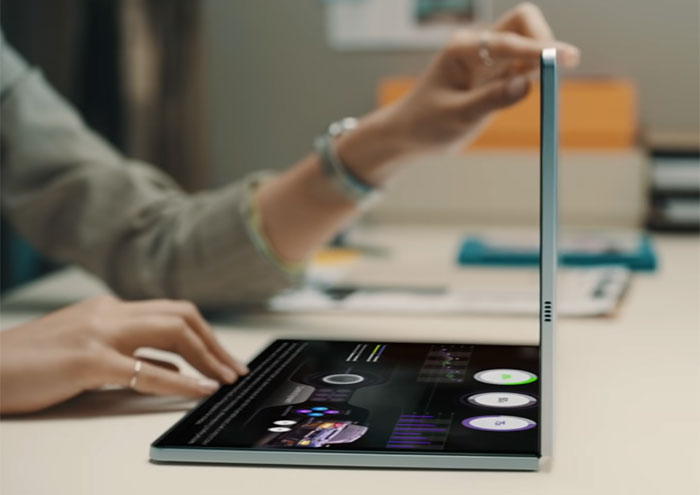 Liliputing reminds us that Lenovo already launched the ThinkPad X1 Fold last year – a 13.3-inch foldable, but it hasn't been very well received by consumers. Samsung might do better with a bigger screen and some kind of detachable keyboard, perhaps. Another thing Liliputing spotted was that Samsung published a new video showing the durability of its flexible OLED displays. Apparently, they can fold and unfold more than 30,000 times without issue, even in cold environments (at -20°C). That works out at 'only' 82 flexes a day for a year, which might not be much for a smartphone addict.

Posted by excalibur1814 - Wed 01 Sep 2021 11:25
Gosh! That conventional screen looked awful. I wouldn't want one of those and had better buy OLED. (He types, sat in front of a conventional Samsung monitor, that doesn't do what the video showed).

Awful video. Half the products looked fake.
Posted by philehidiot - Wed 01 Sep 2021 17:26
I'm posting this so the Samsung execs think people care. Oooh look, two comments.
Posted by Ttaskmaster - Thu 02 Sep 2021 12:16
Not a fan of touchscreen-only devices anyway, so I really don't care and will only complain about it when it replaces all the things I currently enjoy….
Copyright © 1998 - 2023, HEXUS.net. All rights reserved. HEXUS® is a registered trademark of HEXUS.