Gaming focussed tech company Razer has unveiled what it calls "the ultimate Ultrabook" at the CES 2016. The aluminium unibody Razer Blade Stealth is both thin and light, comparable to modern non-gaming designs, and features a Skylake Intel Core i7 processor, PCIe SSD, 12.5-inch touch display and Thunderbolt 3 connectivity. Its gaming capabilities come largely thanks to that Thunderbolt 3 interface, as Razer has designed the accompanying Razer Core which connects up and works as a power supply, extended I/O hub and can accommodate a 2-slot graphics card with up to 375W of power draw, or "virtually every popular desktop graphics card from AMD and Nvidia". 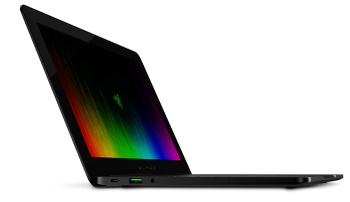 There are two Razer Blade Stealth models being launched initially. They vary by screen resolution and built-in storage capacities. The base model is configured as follows, with the higher res screen and boosted storage model spec difference listed in brackets.

Razer claims that the new laptop is priced "significantly less than comparable systems from other manufacturers". This CNC-milled aircraft grade aluminium laptop is now available for pre-order. The first Razer Blade Stealth Ultrabooks will ship later this month and you will be able to purchase them from the Microsoft Store from February onwards.

This key component is pretty essential if you are going to sit your Razer Blade Stealth down anywhere for serious PC gaming sessions. The Core chassis connects to your Stealth laptop via the 40Gbps Thunderbolt port and provides the following: 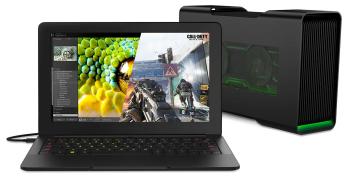 At the time of writing Razer hasn't put a price to the Core. This Thunderbolt expansion chassis will become available in H1 2016. At the CES 2016 Razer also announced the Stargazer "the world's most advanced webcam", and the Nabu Watch wearable for gamers.

Want to know more about the Blade Stealth and Core? Let Razer take you through a HEXUS-filmed walkthrough of both products in the video below.

Wozza365
Ridiculous that they have not included any kind of dedicated GPU built in. I can't exactly take that GPU case on a plane.

I think this is excellent. On the go lightweight and battery life, and more grunt at home when you're plugged in. I wish Dell had done this with the XPS15.

If the screen has good colour range and calibration ability and no stupid DCR (unlike Dell's XPS13) then this could be where my money goes.

Platinum
Wont the GPU be bottlenecked by the 4x PCI-E interface of that CPU / Thunderbolt port?

The enclosure provides USB3 ports x4No. This is not what is uses for the graphics connection. The spec list states it will run one card at PCIe 16x and connects via thunderbolt3.

Can Hexus run a review of this? Better still a group test comparison of this and similar portable high end stuff like the XPS, Alienware 14, Aorus, Asus, MSI and the like.